Lodge Temperance 2557 is over 100 years old. In 1895, when Lodge 2557 was proposed, it was named Temperance to reflect a total abstinence from the consumption of alcoholic liquor. In masonic teaching ‘Temperance’ was one of the cardinal virtues. In the years 1910 – 1922 Lodge Temperance helped found and name three daughter lodges, Prudence, Fortitude and Justice to complete the historic set of four as proclaimed in our ritual.

Temperance met in the Central Masonic Hall by the Theatre Royal in Pilgrim Street. In 1903 it was moved to the Old Assembly Rooms at Barras Bridge, a set of tearooms as distinct from another hall with the same name. The new venue was more compatible with the lodge name.

In 1948 it was agreed to move to lodge rooms made available in the Bloomfield Hall, Jesmond. In September 1968, due to the redevelopment of the Bloomfield, Lodge Temperance along with other lodges were persuaded to move to Ferguson Lane, Benwell, a short lived venture. Whilst at Ferguson Lane in April 1973, members voted to rescind the by-law which had proscribed alcohol at lodge meetings. 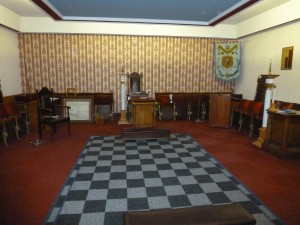