The Charge to the initiate informs him that “Monarchs have been promoters of the Art, have not thought it derogatory from their dignity to exchange the Sceptre for the Trowel, have participated in our mysteries and joined in our assemblies.”

We can’t claim to have any noble or royal members in Lodge Temperance 2557 but we’ve had members from all other walks of life including Mayor’s, Ministers, butchers, miners, gardeners and have now discovered a cowboy!

Mrs Leslie Newman, the wife of our Secretary, Wbro Keith Newman is an antiques dealer specialising mainly in Victorian Edwardian jewellery, however she often finds hidden gems of other kinds and at a recent car boot sale found a Lodge Temperance 2557 regalia case with apron and documents. The case and contents belonged to Bro Luke Nicholson. Bro Luke Nicholson was 25 years old when he was initiated into Lodge Temperance 2557 on January 25th 1910 having been proposed as a fit a proper person to be admitted into freemasonry by WBro John Armstrong, P.M., PProvGSuptwks, Treasurer and seconded by Bro W. C. Crowe, Assistant Secretary at the meeting on December 20th 1909. Bro Luke was a “Rancher” residing at Blyth House, Leadgate just outside Consett, Co Durham. He was only with the Lodge a short time resigning on 31st August 1910.

Today, the UGLE book of constitutions rule 168 limits the conferring of a degree to no more than two candidates on the same day, but in the early 1900’s Lodge Temperance 2557 routinely performed a degree with up to five candidates and Bro Luke’s initiation was no different as he was one of five initiated on the same night including  Mr Thomas Allinson, Mr Arthur Walter Hall, Mr James Ridley, and Mr Thomas Gowland and all by the same degree team! All five were passed to the second or Fellowcraft degree on February 21st and raised to the sublime degree of a Master Mason on March 21st 1910.

The keen historian will wonder what a “rancher” was doing in Leadgate, Co. Durham, a village just outside Consett, whose inhabitants were more likely to be employed in coal-mining and iron or steel working. Luke’s parents and brother John were successful drapers, his brother Edward a veterinary surgeon and in 1901 at the age of 16, Luke was a bank clerk.

So when did he become a “rancher” a word more used to describe someone who is involved with raising cattle on a ranch in North America? The passenger arrival and departure lists of the time perhaps hold part of the answer. As early as 1903  Luke travelled to Canada with later journeys to and from ports in North America when his occupation was variously described as a “cowboy” and “rancher”.

His descendant Lesley McPherson visited Luke and his family in their home at 28, Rothbury Terrace, Heaton when Luke was still alive and recalls he went to California working as a cowboy driving cattle from New Mexico to Canada and still had his saddle and chaps. He had a very bad fall from a horse and broke his leg which likely caused his return to England and ended his vocation as a rancher.

Luke married Elizabeth Emily White in Newcastle  in 1919 and they settled at 28, Rothbury Terrace, Heaton where their daughter Jean Isabel Nicholson was born in 1921. It seems that Luke settled into a life as a clerk and by 1939 was working as a clerk dispatcher for a marine engineering company. Elizabeth died at 86 in 1969 followed by Luke in 1971 at the age of 87. Their daughter Jean never married and continued to live in the family house at Rothbury Terrace and died in 2002.

Thank you to Luke’s descendant Lesley McPherson for providing the photo of Luke and personal information.

Thank you Wbro Keith Newman for the photos of Bro Luke’s regalia and documents below. 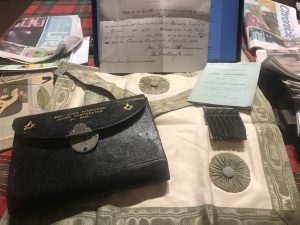 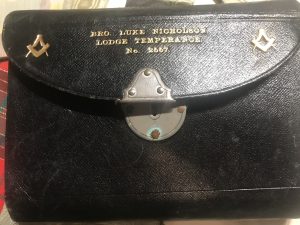 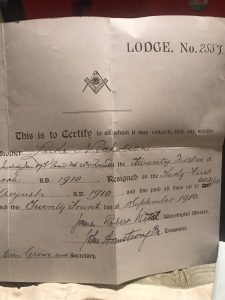 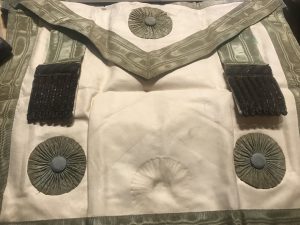