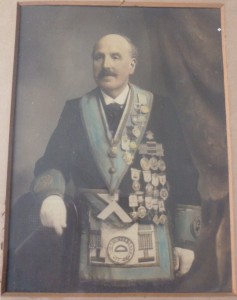 John Armstrong was a Freemason and co-founding member of Lodge Temperance 2557 which at the time the Lodge was consecrated in 1895, met at the Masonic Hall, Shakespeare Street, Newcastle-upon-Tyne. He was a member of Lodge of Industry No 48, Gateshead, where he was initiated on the 25th April 1892, passed on the 23rd May 1892 and raised on the 22nd August 1892.

In early 1895 a group of Freemasons thought it a good idea to form a Lodge which would have no intoxicating drinks at any of its meetings. John chaired the first meeting held at the North of England Temperance League to discuss the formation of what was to become Lodge Temperance and after discussion it was agreed to sign a petition and forward it to Grand Lodge. The petition shows he was a subscribing member and Inner Guard of Lodge of Industry No. 48, living at 36, Denmark Street, Gateshead and working as an assistant outfitters. It was also agreed at the meeting that John would become the first Senior Warden of Lodge Temperance. To minimise costs and to ensure the lodge started without debt, several brethren promised to donate items of furniture and John’s contribution was a third degree sheet.

After his year as Senior Warden he became Master the following year in 1896, Immediate Past Master in 1897 and elected by the Brethren to the office of Treasurer in 1898, a position he remained in until 1927. He also went on to be Master of Lodge of Industry No. 48 in 1899.

John was given the Provincial Grand Rank of Provincial Grand Superintendent of Works in 1901. He was a co-founder and first Worshipful Master of Northbourne Lodge No 3241 consecrated in the  Industry Masonic Hall, Jackson Street, Gateshead, on Saturday 27th July 1907,  co-founder and first Worshipful Master of Lodge Prudence 3424 consecrated on Wednesday March 30th 1910 at the Assembly Rooms, Barras Bridge, Newcastle Upon Tyne and one of one hundred and seventy six masters and past masters who co founded Northumbrian Masters Lodge No 3477 consecrated on 31st January 1911 at the Assembly Rooms, Barras Bridge.

John was born in 1863 in Naworth near the small market town of Brampton about 9 miles east of Carlisle, Cumberland. It appears from the records he was the illegitimate son of Margaret Armstrong and lived with her in the home of his grandparents, James and Jane (nee Bell) Armstrong. His grandfather, James, was an agricultural labourer working on the estate of Naworth Castle, one of the homes of the Earl of Carlisle and then later at Farlam Hall the manor house of the wealthy Thompson family. It seems that he remained in Cumberland until the early 1880’s when he moved to Gateshead, Co Durham where he married Mary Eliza Laverick on 12 Sep 1886. It is interesting to note that he gave his father’s name as Thomas on the marriage register.

In the 1901 census, the first census after their marriage, they are living at 58, Whitehall Road, Gateshead. John is shown as a commercial traveler and Mary a haberdasher and fancy goods draper. Also listed is their adopted daughter, Jane Armstrong aged 26, a dairy manageress (milk). It’s proved impossible to find any other convincing records relating to Jane.

The census return for 1911 shows that John and his wife Mary Eliza have been married for 24 years and have not had any children. They are living in 3, Holly Gardens, Gateshead and John is a commercial traveler selling sewing cottons.

Mary Eliza died on 10 June 1922 at 4, Noble Terrace, Gateshead and in her will she left nearly £700 to her husband, John, and David Octavius Skilling, a hosier. David was also a member of Lodge Temperance and married to Jane Armstrong who was probably John and Mary Eliza’s adopted daughter as mentioned in the 1901 Census.

John died on 12th July 1928  at 8, Noble Terrace, Gateshead and in his will left around £750 to John Ferguson Middlemiss, electrician. It is unknown how Mr. Middlemiss is related to John Armstrong.