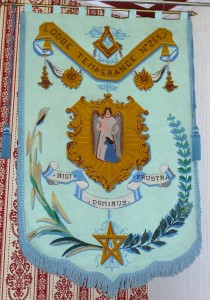 Banner of Lodge Temperance No. 2557

First mention of a Lodge Banner was recorded in December 1897, when it was proposed that this should be purchased. This proposal was withdrawn in January 1898 as it was rumoured that Grand Lodge was intending to re-allocate lodge numbers. The lodge received a communication from Grand Lodge in March, 1899 stating that they had no intention of doing this and the lodge could safely purchase a Banner. The Latin motto was added to the summons during this period. The first occurrence of the Lodge crest with the name and number of the lodge below is on the summons dated 11th April 1896. It is not until the summons of December 11th 1897 that the Latin motto NISI DOMINUS FRUSTRA is shown. The exact date of the change is not recorded nor is the intended translation, it can only be assumed that this change was related to the design of the banner referred to in the minutes for December 1897. 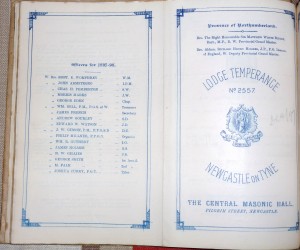 The Newcastle Weekly Courant of Saturday, October 20, 1900 reported that the banner of Lodge Temperance 2557 was unfurled on Monday 15th October 1900:

“Masonic Ceremony in Newcastle, – On Monday evening the new lodge banner of the Lodge Temperance, No 2557, was unfurled at the meeting of the Lodge, at the Central Masonic Hall, Newcastle, in the presence of a large assembly of brethren, by the V. W. Deputy Prov. Grand Master of Northumberland, Bro Ald. R. H. Holmes, PGD, Eng. Bro. Morris Marks, W. M., presided.”

NISI DOMINUS FRUSTRA on the banner in Latin reads, literally, “if not the Lord [it is] in vain. Of course Latin requires interpretation from the context so it can be translated as ‘Without the Lord, everything is in vain’, “Without the Lord, Frustration.” , “Without God, we labor in vain” or as ‘He that acts without the Lord acts in vain.’ All of these translations are correct in terms of the words used in the motto as they have joint meaning in Latin. This is because the Latin word ‘nisi’ translates as ‘unless’, ‘except’ or ‘without’. The word ‘dominus’ stands for ‘lord’ or ‘master’, applying to ‘god’ in this idiom. While finally ‘frustra’ is the Latin word for in vain or useless.

“Unless the LORD builds the house,
those who build it labour in vain.
Unless the Lord keep the city,
he watcheth in vain that keepeth it”.

As applied to freemasonry it could mean “Unless God builds our Masonic edifice our work thereon is in vain”. You will also find the same motto associated since 1647 as part of the City of Edinburgh Council Coat of Arms.

The lodge was presented with a new banner by Bro R Hill a steward of the lodge in February 1983. He was congratulated by the Master on the skill and patience required to produce such a wonderful piece of work. The banner was dedicated in June by the Right Worshipful Provincial Grand Master, John Sherwood Stephenson. This meeting was also honoured by the presence of a number of Brethren from Lodge Les Trois Anneaux No.139 who meet in Paris under the auspices of The Grand Loge National Francais. This banner is still in use today.