Fraternal Visit to Northern Ireland in 2005

The Internet proved a powerful tool when in 2003 Lodge Temperance 2557 made fraternal contact with Brother William Rutherford of the W. E. Scott Memorial Lodge No 554 across the water in Campsie, Northern Ireland. The Worshipful Master W. Bro Peter Malia and brethren of Lodge Temperance 2557 were invited to visit Londonderry as guests of the W. E. Scott Memorial Lodge and on April 1st, 2005 set off with their wives and partners for a most memorable three day visit.

Flying into Belfast airport on Friday evening the party were transferred to the White Horse Hotel, conveniently close to the Campsie Masonic Hall, for a very comfortable two night stay.

This included a very special visit to St Columb’s Cathedral with the Dean of Londonderry as the guide, the Provincial Grand Lodge offices and temple, the Apprentice Boys Memorial Hall, the City Walls and the Tower Museum. The tour brought back very special memories for W Bro. Sgt Alan Birch who was stationed at the barracks right next to the Masonic Hall when he served in Northern Ireland. 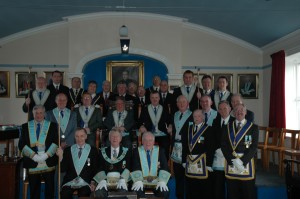 Then, while their Ladies shopped, the Brethren of Lodge Temperance 2557 attended a meeting of the W. E. Scott Memorial Lodge No 554 where a second degree was performed.

The day finished with an Irish themed social night with entertainment, buffet and dancing.

Sunday saw the group heading to the airport after a leisurely breakfast, but this was no ordinary transfer.  The first break in the journey was to sample too much Irish Whiskey at the Old Bushmills Distillery, fortunately followed by a brisk hike on the Giant’s Causeway, an area of about 40,000 interlocking columns, the result of an ancient volcanic eruption. A three course meal at the Smugglers Inn just outside Bushmills completed the afternoon before catching the flight to Newcastle.

A fantastic time was had by all.

A special thank you to Bro William Rutherford of W. E. Scott Memorial Lodge No 554 and Wbro Dave Wardle of Lodge Temperance 2557 for arranging this successful visit.

The Londonderry Sentinel of April 13th 2005 reported the visit with a group photo pictured outside St Columb’s Cathedral (see the image below):

The Lodges initially met over the Internet more than two years ago and since then 49 members of the WE Scott Memorial Lodge have visited Newcastle.

Then 26 members of the Newcastle Lodge paid a visit to the city.

William Rutherford, of the WE Scott Memorial Lodge, said the visitors enjoyed their stay.

He said “They had never been in Northern Ireland before so they didn’t really know what to expect but they ended up having a great time.

“They loved the history of the area and the walls and the women loved the shopping.

“Tony Henderson, tour guide, took them around the walls and we visited the Tower Museum and had a social evening meeting in Campsie Lodge.”

The Lodge also held meetings and were given a tour of the Cathedral and went to the Masonic Hall.

William said that the lodge was now hoping to start meeting with other Freemasons throughout the UK, and further afield.

“We would like to meet with more Freemasons because it was such a success and the Internet makes the world a smaller place,” he said. 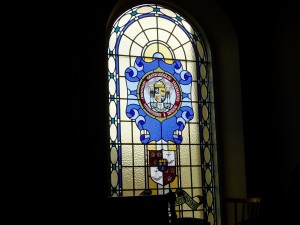 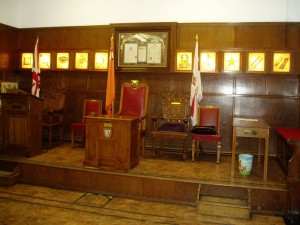 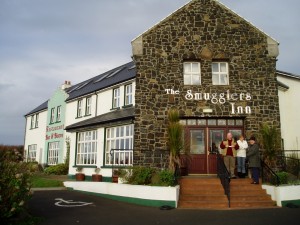 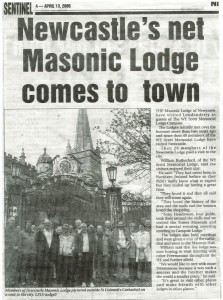