In the beginning of the year one thousand, eight hundred and ninety five, a few members of the order of Ancient, Free and Accepted Masons thought it desirable to form a Masonic Lodge, which amongst other things would have no intoxicating drink at any of its meetings.

A preliminary meeting convened by Brother Lewis Forsyth Allan P.M. of Tyne Lodge No. 991 was held in the office of the North of England Temperance League, 131, Pilgrim Street, Newcastle Upon Tyne. The room being lent by Brother Guy Hayler.

Brother John Armstrong was voted to the chair, and after some discussion it was resolved to sign a petition and have it forwarded to Grand Lodge, praying for a warrant, for a Lodge to be called Lodge Temperance to meet at the Central Masonic Hall, Shakespeare Street, Newcastle Upon Tyne; on the third Monday in each month at seven o’clock in the evening. It was also resolved that Brother John Walker Gibson, Past Master of the Percy Lodge No 1427 be the first Worshipful Master, Brother John Armstrong I.G. of Industry Lodge No. 48 be the first Senior Warden and Brother L. Forsyth Allan P.M. of Tyne Lodge No. 991 be the first Junior Warden.

The petition was prepared by Brother L. Forsyth Allan and signed by the following brethren:

It was then agreed to recommend the following as the first officers:

Bro Andrew Christopher Messer was asked to act as Tyler for the first year and agreed to do so.

The petition was presented by Bro. L. Forsyth Allan to Northern Counties Lodge No 406 at the regular meeting held in the Masonic Hall, Maple Street, Newcastle Upon Tyne; when it received their approval, was signed by the Worshipful Master and his Wardens also by several the Brethren.

The petition was then forwarded to Grand Lodge. The following is a copy of the petition:

To the Most Worshipful Grand Master of the United Fraternity of Ancient Free and Accepted Masons of England.

We, the undersigned, being regularly registered Master Masons of the Lodges mentioned against our respective names having the prosperity of the craft at heart and are anxious to exert our best endeavours to promote, and diffuse the genuine principles of the art; and, for the convenience of our respective dwelling and other good reasons, we are desirous of forming a new Lodge, to be named “Lodge Temperance”.

In consequence of this desire, we pray for a warrant of constitution, empowering us to meet as a regular Lodge, at the Masonic Hall, Newcastle Upon Tyne on the third Monday of each Month, and there to discharge the duties of Masonry, in a constitutional manner, according to the forms of of the order and the laws of the  Grand Lodge; and we have nominated and do recommend Bros. John Walker Gibson, who has served the office of Warden in a regular lodge to be the first Master, and Bro. L. Forsyth Allan to be the first Junior Warden of the said Lodge.

The prayer of this petition being granted, we promise strict obedience to the commands of the Grand Master and the laws and regulations of the Grand Lodge.

Recommended by the W.M. and Wardens of Northern Counties Lodge No. 406:

The Petition was presented at the June 1895 meeting of the Grand Lodge, when they were pleased to grant a warrant for a Lodge to be called “Lodge Temperance” and numbered two thousand, five hundred and fifty seven on the roll of the United Grand Lodge of England.

The by-laws were then read and approved having then to be submitted to Prov Grand Lodge for confirmation.

There was then discussion as to what property the Lodge needed to get and in order that the Lodge should start as clear from debt as possible the following promises were made:

Bro. Gibson a Box of Working Tools.
Bro. Armstrong a Third Degree Sheet.
Bro. Forsyth-Allan a Bible and cushion.
Bro. Womphrey a square and compass to be placed on the bible.
Bro. Marks a pair of Wardens columns.
Bro. Messer gavels and maul.
Bro. Davidson a box to keep lodge property in.

The annual meeting of the Provincial Grand Lodge of Northumberland  held in the Grand Assembly Rooms, Barras Bridge, on Wednesday, 30th October 1895. The Prov Grand Lodge was opened according to antient form by the Right Honorable Sir Matthew white Ridley, Bart., M.P..

Bro. J. W. Gibson having taken the obligation regarding the Government of the Lodge; was duly installed and invested as Worshipful Master.

There being no further business the lodge was closed at 5 pm.

The Freemason’s Chronicle of 2nd November 1895 reported that:-

there was a very large attendance of Brethren from various parts of the county, so large, in fact, that the gallery at the end of the hall was utilised for the accommodation of members of the Craft.

The whole of the Lodges were exceedingly well represented, and probably one great cause of attraction was the desire to welcome the Provincial Grand Master on the high distinction conferred upon him in the councils of the nation, and the other, the fact of the consecration of three new Lodges; the belief being expressed that never before were so many Lodges made at the annual meeting of Provincial Grand Lodge.

The new Lodges consecrated were the Temperance, Delaval and Holmes. The order of ceremony was compiled and arranged by the Deputy Provincial Grand Master Bro. Ald. R. H. Holmes, and was of a very impressive character. The Provincial Grand Master installed Bro. John Walker Gibson as Worshipful Master of Temperance, Bro. George Wilson of  Delaval and Bro. S. Hudson of Holmes Lodge. 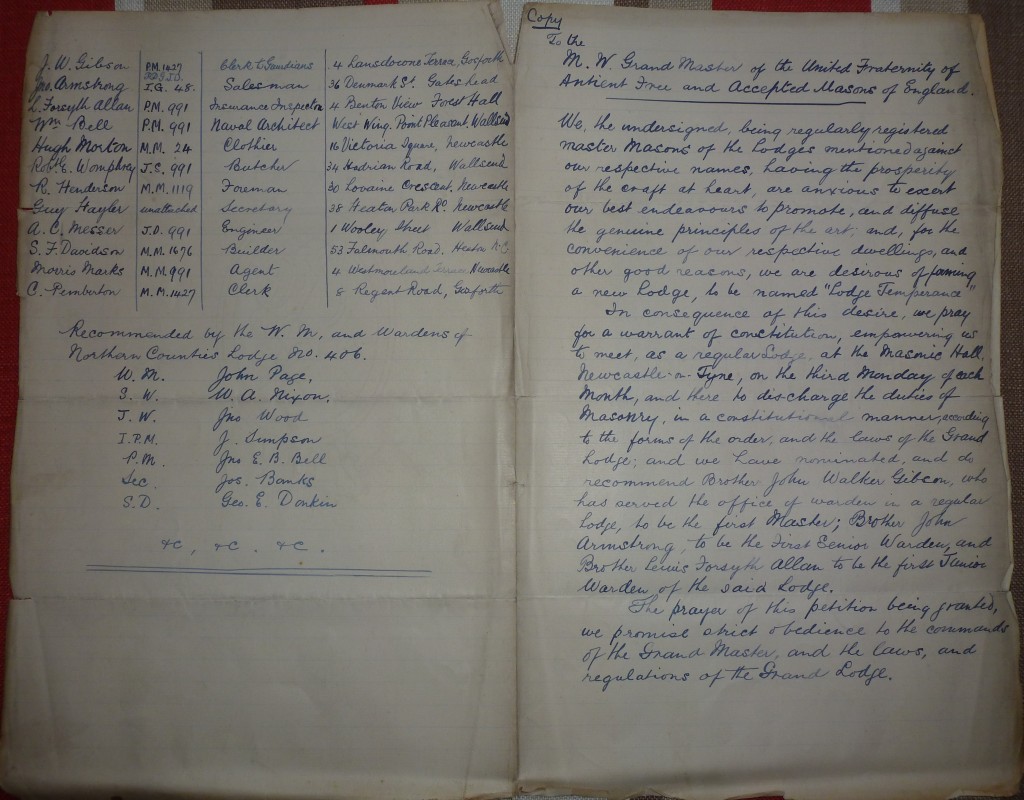 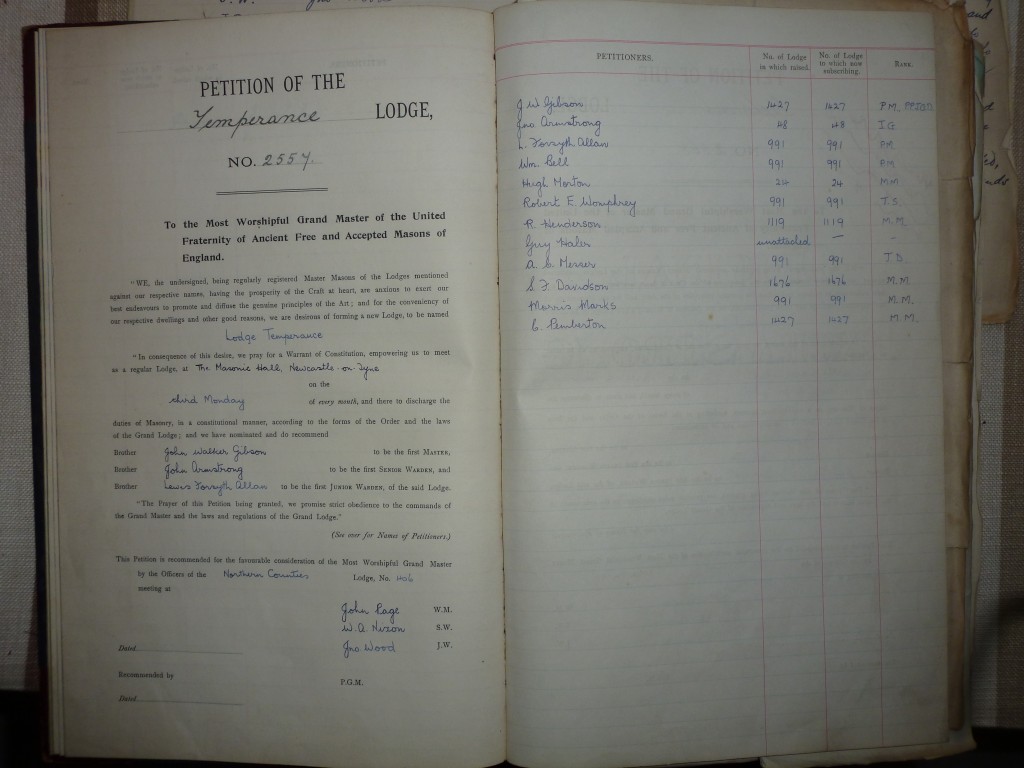 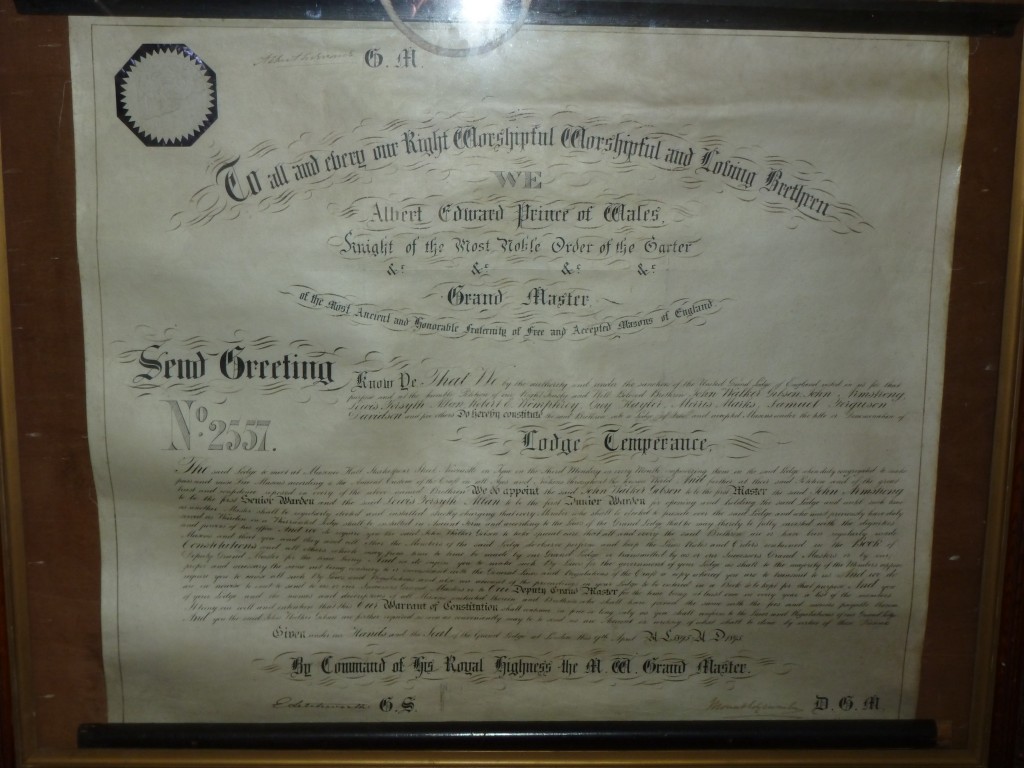