The Earl of Durham’s Monument, locally Penshaw Monument, is a folly built in 1844 on Penshaw Hill, Sunderland and is dedicated to John Lambton (1792–1840), 1st Earl of Durham and the first Governor of the Province of Canada.

The Doric tetrastyle monument is 30 metres (98 ft) long, 16 metres (52 ft) wide and 20 metres (66 ft) high. The columns are each 2 metres (6 ft 7 in) in diameter. It was designed by John and Benjamin Green and built by Thomas Pratt of Sunderland, based on the Doric order. One of the pillars contains a spiral staircase to a walkway around the top of the monument.

The foundation stone was laid by Thomas Dundas, 2nd Earl of Zetland (the Grand Master of the United Grand Lodge of England) on 28 August 1844, four years after the death of John Lambton.

A plaque used to be in the north east corner of the monument which read:

THIS STONE WAS LAID BY
THOMAS, EARL OF ZETLAND
GRAND MASTER OF THE FREE AND ACCEPTED MASONS OF ENGLAND
ASSISTED BY
THE BRETHREN OF THE PROVINCES OF DURHAM AND NORTHUMBERLAND
ON THE 28TH AUGUST 1844
BEING THE FOUNDATION STONE OF A MEMORIAL TO BE ERECTED
TO THE MEMORY OF
JOHN GEORGE EARL OF DURHAM
WHO
AFTER REPRESENTING THE COUNTY OF DURHAM IN PARLIAMENT
FOR FIFTEEN YEARS
WAS RAISED TO THE PEERAGE
AND SUBSEQUENTLY HELD THE OFFICES OF
LORD PRIVY SEAL, AMBASSADOR EXTRAORDINARY AND
MINISTER AT THE COURT OF ST. PETERSBURG AND
GOVERNOR-GENERAL OF CANADA.
HE DIED ON THE 28TH OF JULY 1840 IN THE 49TH YEAR OF HIS AGE
THE MONUMENT WILL BE ERECTED
BY THE PRIVATE SUBSCRIPTIONS OF HIS FELLOW COUNTRYMEN
ADMIRERS OF HIS DISTINGUISHED TALENTS AND
EXEMPLARY PRIVATE VIRTUES.

DONATED TO THE NATIONAL TRUST ON 1ST SEPTEMBER 1939 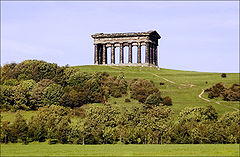