Alexander was proposed as a fit and proper person to be made a Freemason by Bro James Hope on behalf of Bro Joseph Elliott and seconded by WBro John Harris, IPM, at the Lodge Temperance 2557 meeting held at the Assembly Rooms on 15th November 1915. He was a 30 year old Assistant Assurance Superintendent residing at 41, Elsdon Road, Gosforth, Northumberland.

A successful ballot was held at the meeting on 20th December 1915 and Alexander was initiated into the mysteries and privileges of Ancient Freemasonry on the same evening. He was passed to the second or Fellowcraft degree on the 17th January 1916 and raised to the Sublime degree of a Master Mason on the 21st February 1916.

He was excluded in 1923 for being three years in arrears but we know he was a founding petitioner of General Gordon Lodge 4292 which was consecrated on 17th October 1921and met in Chatham, Kent. Alexander gave his address as 476, Canterbury Street, Gillingham, Kent and his membership lapsed on 30th September 1928 so he was likely excluded.

Alexander was born on 11th June 1887 in South Shields, Co. Durham to John William and Wilhelmina Robson. John was a marine engineer and millwright, and in 1881 owned a steam wherry operating out of North Shields. He married Wilhelmina Fraser in South Shields in 1873 and they had ten children of which two died young.

Alexander started his working life as an electrical engineer but on 26th November 1908 joined the Prudential Assurance Company as an Insurance Agent at South Shields.  He was promoted on April 1914 to Assistant Assurance Superintendent  in Gosforth.

Alexander married Mary Johnson Ord in Gateshead in 1906 and they had at least four children, one of which died in infancy:

The Government had introduced the Military Service Act on 27 January 1916 and all voluntary enlistment was stopped. All British males were now deemed to have enlisted on 2 March 1916 – that is, they were conscripted. Conscripted men were no longer given a choice of which service, regiment or unit they joined.

Alexander was called up on 13th May 1916 for the duration of the war and joined the Tyneside Division of the Royal Naval Volunteer Reserve as a Petty Officer with service number T.Z9822. After his initial training he was assigned on 4th July 1916 to Victory VI which was most likely the accounting section of the shore base at Crystal Palace in London.  Although men were drafted onto the books of Victory, they were not necessarily physically present. Many men on the books were actually serving in other locations and we know that Alexander was with the Tyneside Division.  He was demobilised on 7th February 1919 and awarded the British War Medal which indicates he did not enter into a theatre of war or serve overseas. He is also commemorated on the Prudential Assurance WW1 Roll of Honour – see below.

After the war, Alexander moved with his wife and three children to Gillingham in Kent where their marriage ran into problems. We don’t know the circumstance but in 1921 Mary took their children never to be seen again.

We know this because on the 2nd September 1956 a notice was placed in a newspaper by South Shields Solicitors J.S. Tindal and Bullen seeking the whereabouts of Alexander’s first wife Mary Johnson Ord or her children last seen in Gillingham in 1921.

Alexander remarried in 1923 in Medway, Kent to Eva Amor and by 1939 they were living in Harrow, Middlesex where he was a Civil Servant. 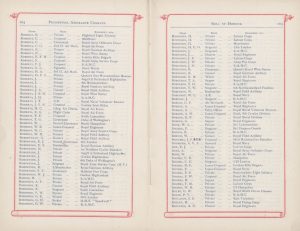