John William Askew was a Freemason, and one of our forgotten war heroes. He is not listed in the Lodge Temperance WW1 Roll of Honour although the Lodge registers show he was on war service.

At the Lodge Temperance 2557 meeting held at the Assembly Rooms on the 21st February 1916, John was proposed by W Bro. John Harris, IPM and seconded by Bro. James Harris as a fit and proper person to be made a Freemason. He was a 26 year old commercial clerk living at 257, Stanton Street, Newcastle Upon Tyne. At the meeting of Monday 20th March 1916 a successful ballot was held and he was initiated into the Mysteries and Privileges of Ancient Freemasonry. He was passed to the second or Fellowcraft degree two months later on 15th May. He was raised to the Sublime degree of a Master Mason on 19th June 1916. He signed his Grand Lodge Certificate in open Lodge on 11th July 1916. 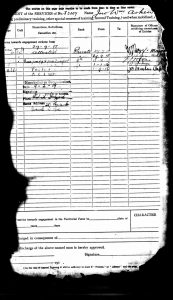 John enlisted with the army on 29th September 1915 at Gateshead and was assigned as a Private to the Army Service Corps with service number T4/252059. On his attestation papers his religion is shown as Congregationalist and at his medical examination it was noted that he had a cataract in his right eye but it was not sufficient to cause rejection although it did result in the need for glasses later in the war. Within 2 months he had been transferred as a Driver to the 663rd ASC Horse Transport Depot Company based at Park Royal, London. These Companies filled a variety of administrative, recruitment, induction, training and re-supply roles and were based in the United Kingdom or at the port of entry to a theatre of war. He remained in England until 17th February 1917 when he embarked to France, arriving in Le Havre on 19th February 1917 where he was attached to the 289th Army Troop Company, Royal Engineers. He spent two years in France and returned to England on 8th January 1919 when he was demobilised to the Royal Army Service Corps reserve. He was awarded the British War Medal and the Victory Medal.

Sadly Joseph senior died in 1896 at the age of 41 but Margaret remarried James Henry Harris from Cornwall, an electrical labourer, in 1906 in Newcastle. It was this James Harris, his stepfather, who seconded John for membership of Lodge Temperance. Bro James was initiated into Freemasonry in Lodge Temperance 2557 in 1913 and described as a 46 year old electrical commutator maker. It’s also possible that John’s proposer W. Bro. John Harris, IPM was related but we haven’t found that connection as yet.

By 1911 Joseph and John William were living with their mother and stepfather at 257, Stanton Street, Elswick. John was working as a draper’s clerk.

After the war John made at least two trips to Sierra Leone, Africa. It seems strange that he married Emily Waggot in Newcastle in early 1923 before setting off on his second trip to Africa, arriving back almost a year later. Emily was from Chester le Street and must have been a very understanding new bride! Her father, Henry Edmund Waggot was a tailor so perhaps that’s how John and Emily met. By 1939 John was working as a commercial claims clerk.