Robert started his Masonic career at St David’s Lodge 393, Berwick Upon Tweed where he was initiated into the mysteries and privileges of Ancient Freemasonry on 1st July 1902. He was recorded as a 21 year old plumber living at High Street, Berwick.  On the 5th August he was passed to the second or Fellowcraft degree and raised to the sublime degree of a Master Mason on 28th October 1902. His time at St David’s Lodge 393 was short lived as he resigned in December 1902. He became a joining member of Lodge Temperance 2557 on August 20th 1906 being proposed by Bro Edward Ward Watson and was a plumber living at 9, Waverley Terrace, Elswick, Newcastle upon Tyne.

His father was born in Gavinton in the parish of Langton, Berwickshire, Scotland on 2nd March 1847 and by 1878 had moved to the coastal town of Berwick upon Tweed on the Scottish border setting up a Baker’s shop in Marygate. A very successful master baker and confectioner, he went on to have a confectioner’s shop at 105, Marygate , baker’s shop at 109, Marygate and another at 83, Castlegate. He died at 19, Tweed Street on 20th March 1913 leaving £3372 (about £300,000 in today’s money) to his sons William and Robert, both plumbers. Alice was born in August 1850 in the small Scottish border village of Norham on the River Tweed, Northumberland. She died at 19, Tweed Street, (now called Albury House), Berwick upon Tweed on 1st April 1924 leaving £659 to her son William who by this time was a sanitary engineer and plumber with premises at 120, High Street, Berwick upon Tweed.

In 1901 Robert, an apprentice plumber was living with his parents in Marygate, Berwick on Tweed and in 1902 passed his final examination to become a plumber. The Berwickshire News and General Advertiser of 15th July 1902 reported that in the competitive examination, which was open to the Northern Counties of England, he gained a first prize.

By 1911 Robert had moved to Newcastle and had started his own business as a plumber and electrical engineer with premises in Bath Lane.

Robert enlisted with the army for the duration of the war on 15th February 1916 with service number H6625 and his first assignment was to the 85th Squadron of the Royal Flying Corp as an air mechanic on 3rd August 1916.

On 1 April 1918 No. 85 Squadron, based at Hounslow Heath in West London, was transferred into the newly formed Royal Air Force and Robert was transferred at the same time with the rank of Air Mechanic 3rd Class. Following a period of training the squadron deployed to France during May 1918 and Robert was reclassified as an Air Mechanic 2nd Class in July 1918. Equipped with the Sopwith Dolphin and later the Royal Aircraft Factory SE5a fighter, it flew fighter patrols and ground attack sorties over the Western Front until the Armistice was signed. Robert was in France with the squadron from 21st May 1918 until 5th February 1919.

It’s likely that Robert knew he was to be posted to France as he married Jessie Kennedy on 30th March 1918 in a ceremony at St Paul’s Church, Hounslow Heath. The church register shows he was an Air Mechanic with the RFC living at Hounslow Heath Aerodrome. Jessie gives her address as 21, Havelock Street, Newcastle Upon Tyne. Robert and Jessie did not have any children.

Interestingly, after the war Hounslow Heath’s airfield was converted into London’s first civil airport, operating from August 1919 to March 1920, when the service was transferred to Croydon but can lay claim to the world’s first scheduled air service, between London and Paris; as well as the first flight from England to Australia in 1919.

Following his war service, Robert resumed work as a plumber and electrical engineer, eventually establishing a large and successful plumbing and engineering business in Newcastle. 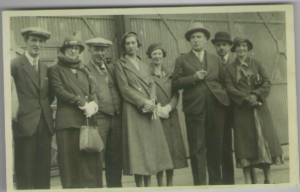 Taken in 1939 at the Tyne Commission Quay. Jessie is on the right and Robert is third on the right (with the pale hat).

He continued to operate out of Bath Lane until 1928 when he moved the business to 23, Picton Place with a flat above which they named Tweedholme. Picton Place was an extension of Ellison Place, adjacent to New Bridge Street station, terminus of the Blyth & Tyne rail line. This later became a coal yard which their flat overlooked and Jessie would complain it got very dusty from the coal dust. His firm, as described in various contemporary trade directories, was involved with plumbing, sanitary, heating, ventilating, electrical and drainage contracting. There is nothing left today, as much of the area was obliterated when the A167M and the slip road just north of New Bridge Street bridge was built.

1928 seems to have been a momentous year for Robert as not only did he move to Picton Place but on 12th May 1928 bought Chain Bridge House which they also named Tweedholme, complete with boathouse, overlooking the Union Chain Bridge, in the small village of Horncliffe. Situated on the banks of the River Tweed, Horncliffe is four miles west of Berwick upon Tweed and Robert and Jessie would take trips there in their boat “Jessie”. The river is famed for its trout and salmon fishing and the Grade 1 listed Union Chain Bridge which was constructed in 1820 and the first and now the oldest chain suspension bridge in Britain carrying a public highway. 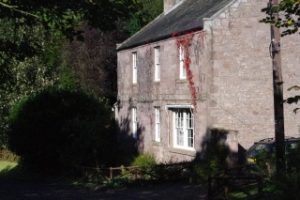 It was also around this time that Robert became president of the National Federation of Plumbers and Domestic Engineers. The Yorkshire Post and Leeds Intelligencer of 24th August 1928 reported that he addressed the Federation as President in Newcastle on how it was the duty of plumbers to educate people in the use of smokeless fuel apparatus. Later in 1928 he was admitted to the Freedom of the City of London when he joined the Worshipful Company of Plumbers of London.

Robert’s fortunes continued to improve and at the outbreak of the World War II he won a contract for the plumbing for an Army camp near Barnard Castle. Sadly, he died on 12th June 1941 leaving a substantial amount to his widow Jessie. The National Probate Calendar shows he left £23,775 which in today’s money is around £1,264,000.

Robert was cremated at Newcastle Crematorium and the officiating Minister was Rev Herbert Barnes of the Unitarian Church in Ellison Place, Newcastle and his ashes were interred at Berwick.

There is a plaque which commemorates Robert in the Unitarian Church. 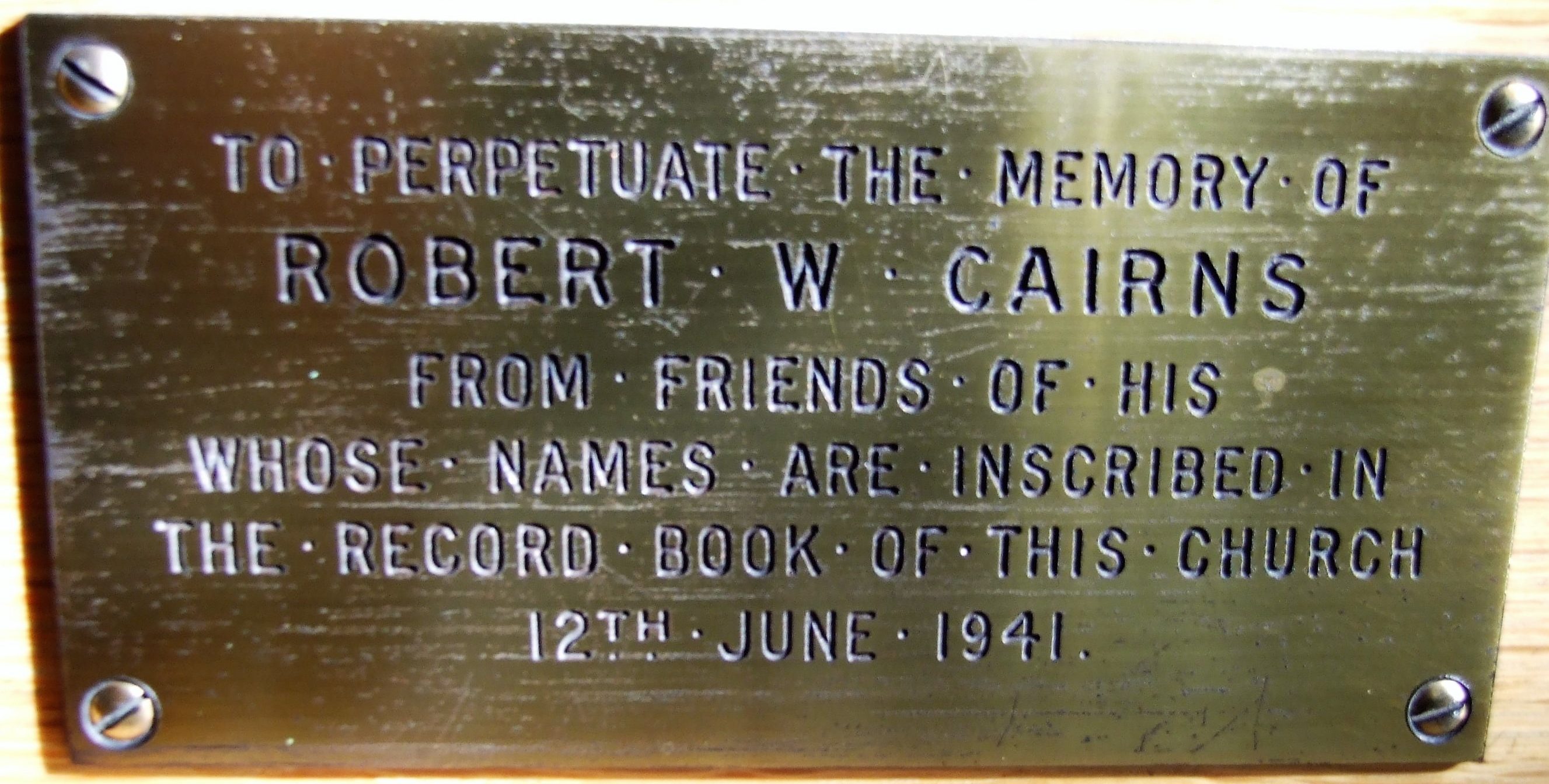 Jessie stayed on at Chain Bridge House after the death of her husband, although throughout the remainder of the war was terrified of an air attack on the Bridge. With two air raid shelters – one built on to the house and one built in the wood half up the bank behind the house she had planned an escape route, with her maid, from the first shelter to the second if and when things got scary. Fortunately, the planned escape route was never needed. 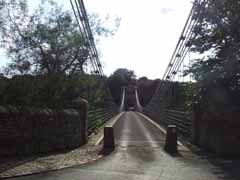 After Robert’s death, Jessie married Thomas Richard Jackson (nicknamed Tucker) on 27 October 1942 at St Cuthbert’s Church, Norham, Berwick on Tweed, Northumberland.  Richard was an old bachelor friend of Robert’s.  However, the marriage did not last and they separated and on 21st Jan 1944 Jessie reverted to her former married name of Cairns.  Richard Jackson, born 17 May 1889 at North Sunderland, Northumberland (a village near Seahouses), died on 7 September 1982 in Newcastle.

Jessie died 21 April 1955, aged 67, at Middleton Hall Retirement Home, Middleton St George, Co. Durham, leaving £6882  13s 6d, around £165,000 in today’s money, to her brother in law, Harvey Bowser who was married to Jessie’s sister Agnes.  Harvey was employed by Robert as the storekeeper for his works premises at Barnard Castle.

Many thanks to Edward Cawthorn, David Holmes, Leigh Nelson and Maurice Large for their help with this biography.

Photo of Robert’s Memorial Plaque in the Unitarian Church, Ellison Place Newcastle Upon Tyne courtesy of Maurice Large, a member of the church.