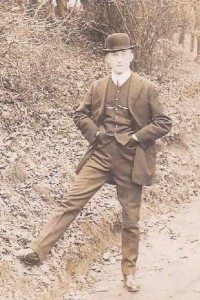 James was a Freemason and member of Lodge Temperance 2557 but is not listed in the Lodge Temperance WW1 Roll of Honour although the Lodge registers clearly show he was away on war service. We can only speculate why he and several other members were omitted from the Roll.

At the Lodge Temperance 2557 meeting held at the Assembly Rooms on the 20th December 1915, James was proposed by Bro. Ralph West and seconded by Bro. Rodrick Urquhart as a fit and proper person to be made a Freemason. He was a 29 year old Drapers Assistant living at 10, Bayfield Gardens, Gateshead. At the meeting of Monday 17th January 1916  a successful ballot was held. He was initiated into the Mysteries and Privileges of Ancient Freemasonry on the 16th March 1916 and was passed to the second or Fellowcraft degree on the 19th May 1916. War service interrupted his progression and it wasn’t until 21st January 1918 that he was raised to the Sublime degree of a Master Mason.

James was the son of Pearson Black, a miner and later, an engine fitter from East Holywell, Northumberland, and Ann Maghie from Scotby near Carlisle, Cumberland who were married in Gateshead in 1880. They had four children:

In the 1911 census taken on 2nd April James was with his widowed mother Ann and younger sister Anne at 63 South Street, Gateshead. He married Alice Chrishop at Christchurch, Gateshead on 7th August 1911 and initially lived with his mother where their eldest son was born, before moving to 10, Bayfield Gardens, Gateshead. They had four children:

Around 1915, James took his wife and son William to Canada to visit Alice’s sister who had just gone to live there. It’s unclear if this was to emigrate or not but with the war raging in Europe they decided to return home and James signed up.

Private James Maghie Black, no. 32901, enlisted in the 21st  Battalion, Durham Light Infantry, on 10th December 1915. He was posted to the 4th Battalion on 1st September 1916 and then to the 11th Battalion and landed in France with them on the 14th. His service record shows he suffered gas wounds in 1917, probably during the third battle of Ypres.  He returned home on 11th November 1917 and was later transferred to the Army Service Corps, Mechanical Transport Depot Company in Sydenham, Kent,  service no. M/427370. Interestingly, while there, on 31st December 1918 he went absent from base without permission and as a punishment was confined to barracks for 4 days with the loss of two days pay. He was demobilized from the army on 13th February 1919 and was medically examined and given Army Form Z22, which allowed him to make a claim for disability arising from his military service. His service record is unclear if he was successful.

Debbie, his granddaughter, recalls family stories that James could be somewhat direct with people which could upset them but he was a very caring family man who looked after his elder brother and treasured his four sons. He loved home cooking and would not eat bought food. Debbie remembers hearing a tale that when James was gardening one day he dug up his wife’s favourite plants!

After the war, James continued in the clothing business and became a travelling salesman for the Co-op. He had a chauffer and visited shops in Northumberland and Durham selling fur coats, wraps and collars. All his daughter-in-laws had lovely fur wraps, collars for coats and hog skin gloves!

The family moved to Ivy Road in Walkerville, Newcastle  in 1923. The house was built by James’ brother-in-law Henry (Harry) Elliott Grieves, another freemason, who later moved to Hendon, Middlesex and joined a Lodge that met at Freemasons Hall, Great Queen Street, London. 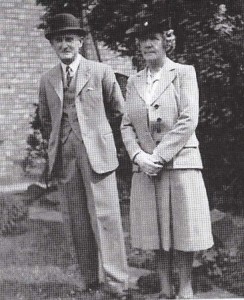 James and Alice at Ivy Road

His death was recorded in the Newcastle Evening Chronicle of Monday November 14th  1955: