At the Lodge Temperance 2557 meeting held at the Assembly Rooms on the 21st December 1914, Matthew was initiated into the mysteries and privileges of Ancient Freemasonry. He was passed to the second or Fellowcraft degree on the 15th February 1915 and raised to the Sublime degree of a Master Mason on 15th March 1915. He was proposed by Bro. Isaac Adamson and seconded by Bro. Nicholas W. Maughan and was a 28 year old Vocalist living at 27, West Street, Whickham, Co. Durham.

Unfortunately the service and pension records for Matthew’s time during the war can’t be found so are likely among the many Records irretrievably damaged or lost as a result of enemy bombing in 1940.

There are many Matthew Newton’s listed in the medal index cards and rolls but we struck lucky finding an article in the Yarmouth Independent newspaper of 15 July 1916 which reported on a concert at the Wellington Pier and Gardens, Great Yarmouth, by the band of the 5th Prov Battery RFA where Gunner Matthew Newton was mentioned. This led us to Matthew’s medal index card and medal roll which shows he was a Gunner with the Royal Garrison Artillery with service no. 94796 and then with the Royal Field Artillery with service no. 249795.

The 5th Provisional Battery RFA was part of the 5th Provisional Brigade which became the 225th Mixed Brigade in December 1916 and the Battery was redesignated the 1207th Home Counties Battery RFA. Part of their role was physical conditioning to render men fit for drafting overseas. It’s not known if Matthew served overseas but he was awarded the Victory medal and the British war medal.

Matthew was born 18th June 1886 in Whickham, Co. Durham to Thomas and Jane Newton. Thomas was a labourer/brick maker from Swalwell, Co. Durham who married Jane Metcalf Buckton, a native of Whickham, in 1881 in Gateshead, Co. Durham. They had thirteen children of which seven survived infancy.

Two of Matthew’s brothers were colliery workers, John a blacksmith and Thomas a joiner so it’s surprising that Matthew was able to pursue a career as a singer and entertainer. Perhaps his story is like that of the young boy in the film “Billy Elliot” who had a passion for dancing and overcame many obstacles to pursue his dream.  In 1901 at the age of 14, Matthew was working as a labourer for a mason in Whickham but by 1911 he was a professional singer and musician. 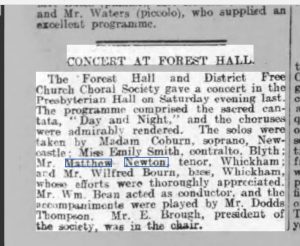 The earliest we have found him performing is as a soloist at a concert in 1909 at the age of 23 in the Presbyterian Hall, Forest Hall with the Forest Hall and District Free Church Choral Society where he is listed as a tenor from Whickham. The concert, of the cantata “Day and Night”, was reported in the Morpeth Herald of 18th December 1909 which commented “his efforts were thoroughly appreciated”. 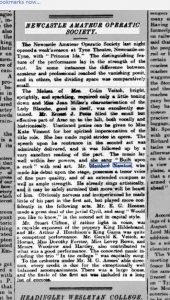 His debut on the stage the following year was with the Newcastle Amateur Operatic Society in a week’s season at the Tyne Theatre, Newcastle upon Tyne performing as a solo tenor in “Princess Ida”, the Gilbert and Sullivan comic opera. The Yorkshire Post and Leeds Intelligencer of 12 April 1910 reported he “possesses a tenor voice of fine pure quality and of an extended compass as well as ample strength. He already sings artistically, and it may be safely surmised that more will be heard from him. Obviously nervous and inexperienced he made little of his part in the first act, but played more confidently in the following acts.” 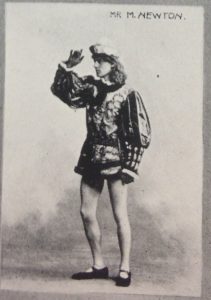 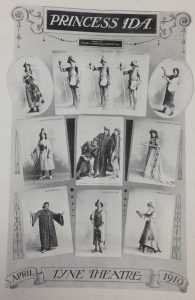 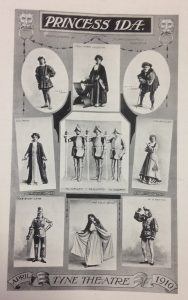 Shortly after this debut Matthew became a professional pupil of the singing teacher, conductor and choirmaster Mr. William McConnell-Wood of Lovaine Terrace, Newcastle upon Tyne and performed with his Northumbrian Select Choir at many venues across the North East. McConnell- Wood was the cofounder of the Newcastle Conservatoire and a professor of music who by 1911 had formed the choir and was teaching on his own.

Matthew, aged 29, married Margaret Jane Kydd, aged 37, in the Gateshead Registry Office on 6th August 1915. Margaret, from Matthew’s hometown of Whickham, Co. Durham, was the daughter of James Kydd, a stone mason so it’s likely he knew her as we know that in the 1901 census, Matthew was a labourer to a mason and perhaps that mason was James Kydd! 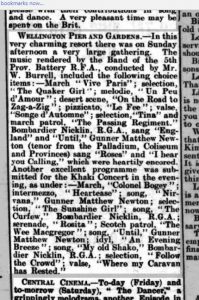 Matthew Newton in the Yarmouth Independent on 15 July 1916

By 1914 Matthew was being billed as the “famous northern tenor” and during the ensuing war years continued to sing at military concerts including with the band of the 5th Provisional Battery, Royal Field Artillery. In 1918 while on furlough from the Western Front he sang with other performers and orchestra of the 25th Division at a variety concert in Wigmore Hall, London to raise funds to provide comfort to the men in the trenches.

After the war he returned to the North East and continued with his singing career. The BBC’s Newcastle Wireless Orchestra started broadcasting in 1923 and Matthew was a regular singer with audiences as far as Australia and by 1924 was performing at venues throughout England. He was also teaching voice production and singing, billing himself as the “Tenor from Queen’s Hall and Albert Hall, London”.

In the late 1920’s Matthew was part of a touring chorus in a new comedy revue called “Just Plain Folk” full of comedy, song and dance, performing alongside the likes of the “Jesmond Boys” and the “Clayton Girls”. The revue was staged throughout the Country and to all parts of the UK. In one newspaper review he was described “as a straight Vocalist Matt Newton the well-known Tenor excels, and his fine manly personality and splendid voice is a valuable asset and contrast to a show brimful of comedy”

Matthew continued to perform and in the 1939 register was in Sunderland and listed as a travelling theatrical actor and vocalist. He was boarding with Henry (Harry)  Ashton another travelling actor, vocalist and famous comedian.

Matthew and Margaret lived in Heaton, Newcastle Upon Tyne for a short while from 1928 to 1932 where Margaret is believed to have died in late 1932. Matthew left Heaton shortly after and his whereabouts has eluded our research.

It’s not known when Matthew died, but he continued to perform into the 1940’s. 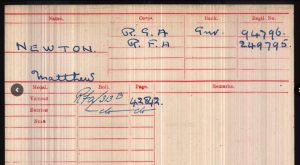 Many thanks to Matthew’s great nephew Ian Newton and Ian’s wife Susan for their help with this biography.