George William Allinson was a Freemason, member of Lodge Temperance 2557, a Corporal with the Royal Marines Light Infantry and one of our forgotten war heroes. He is not listed in the Lodge Temperance WW1 Roll of Honour although the Lodge registers clearly show he was on war service.

George was proposed by Bro Edward Watson and seconded by Bro J. Cuthbert as a fit and proper person to be made a Mason at the Lodge Temperance 2557 meeting held at the Assembly Rooms, Newcastle upon Tyne on the 17th February 1913. He was recorded as a 32 year old Water Rate Collector living at 121, Cartington Terrace, Heaton. A successful ballot was held on the 17th March 1913 and he was initiated into the Mysteries and Privileges of Ancient Freemasonry on 21st April 1913. On the 19th May he was passed to the second or Fellowcraft degree and raised to the Sublime degree of a Master Mason on 21st July 1913. He signed his Grand Lodge certificate on 18th August 1913.

Bro George went on to become a founding member of Segedunum Lodge 4313 in Wallsend. It was granted its warrant on 13th June 1921 and consecrated 29th July 1921. Sadly, Bro George chose to resign from Lodge Temperance at this time on 15th November 1921

George William was born on 25th June 1880 in Shieldfield area of Newcastle upon Tyne, the son of George Allinson and Mary Anne McArthur who were married in 1880 in Newcastle upon Tyne.  George senior was an inspector for a water company. George senior and Mary Anne and their children lived their early married life with Mary Anne’s widowed mother, Maria McArthur, and siblings in Copeland Terrace, Shieldfield and later on Shields Road, Byker before having their own home in Hartingdon Street, Elswick. They had four children:

George William married Ethel Laura Moody in 1907 in Newcastle. The records indicate they had two children, Doris born in 1908 and George Kenneth born in 1921. George William had followed in his father’s footsteps and worked for the Newcastle and Gateshead water company as a collector of water rates.

George’s service record is available from the National Archives for a fee, however, we know he enlisted for the duration of the war (short service) on 30th September 1916 with the Royal Marine Light Infantry no. CH/1749/S and was assigned to their Chatham Division as a corporal. The Royal Marines were an integral part of the Royal Navy and in WW1 there were the Royal Marine Light Infantry (RMLI) and Royal Marine Artillery (RMA) organised into three Divisions based at Chatham, Portsmouth and Plymouth. CH in his service number indicates he was with the Chatham Division which occupied barracks on a site adjacent to the southern end of the Dockyard. The division supplied drafts and reinforcements to man the Royal Navy ships and the Royal Marine Battalions. It’s not known what duties George had at Chatham or whether he served on a Royal Navy ship. The Naval Medal and Award Rolls show that George was awarded the British War Medal.

After his war service, George continued with the Newcastle and Gateshead water company as a water rate collector and in 1945 attained 50 years with the firm, only the tenth employee to do so. On his retirement he was presented with a gold watch from the directors and a wallet of savings certificates from the staff.  The Newcastle Journal and Evening Chronicle of 15th February 1945 both recorded the event and the Chronicle added that “Mr. Allinson, in his youth, a well-known athlete is still interested in sport, being a judge for the National Cycling Union and the Amateur Swimming Association”. 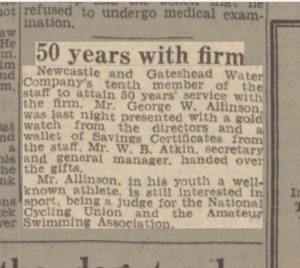 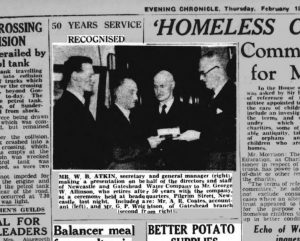 George’s wife, Ethel, died on 8th September 1945 leaving him £141 in her will and George died in Newcastle on 18th November 1955 leaving £1582 to his son George Kenneth Allinson, schoolmaster and his daughter Doris Pringle.