Francis William Dove was a Freemason, member of Lodge Temperance 2557, a Quarter Master Sergeant in the Royal Flying Corp and one of our forgotten war heroes. He is not listed in the Lodge Temperance WW1 Roll of Honour although the Lodge registers clearly show he was on war service.

Francis was proposed by Wbro John Harris and seconded by Bro William Newton, S.W. as a fit and proper person to be made a Mason at the Lodge Temperance 2557 meeting held at the Assembly Rooms, Newcastle Upon Tyne on the 19th March 1917. He was recorded as a 30 year old Quarter Master Sergeant with the Royal Flying Corp living at 14, Loraine Place, Newcastle Upon Tyne. A successful ballot was held on the 16th April and at the same meeting he was initiated into the Mysteries and Privileges of Ancient Freemasonry. On the 21st May he was passed to the second or Fellowcraft degree and raised to the Sublime degree of a Master Mason on the 18th June 1917.

Francis was born in Haxby, Yorkshire on 17th December 1886, the son of James Russel Dove, a builder from Beverley, Yorkshire and Mary Alice Trodd, from Portsmouth, Hampshire who may have married in Clogheen, a village in Co. Tipperary, Ireland in 1882 although it’s unclear how they both came to be in Ireland. They only had the one child.

His mother, Mary Alice, known as Alice, was an assistant Matron who worked for a time at the Grey Coat School for Girls in York. Francis was also a pupil at the Blue Coat School for boys.

The Blue Coat and Grey Coat Schools were set up in 1705 for 40 boys and 40 girls, respectively, all of them either orphaned or from poor, often large, families. Both were charity schools, run by the city corporation. The schools are so named because the children were given clothing each year, which included blue, or grey, coats. Whilst the boys of the Blue Coat School were taught reading, writing, and some arithmetic, as well as the catechism, the Grey Coat girls were prepared for domestic service, learning to spin, sew, and do various household duties.

Mary Alice remarried in 1903 to Thomas Harrison, a confectionary foreman from Copmanthorpe, Yorkshire, and by the 1911 census were living in Scott Street, York. Francis is shown as a fitter and turner employed by a sanitary engineering company.

Francis enlisted with the Army on 1st June 1915 at the age of 28 for the period of the war and was immediately assigned as an Aircraftman II, service number 5820 to the Royal Flying Corps. In October he was promoted to Aircraftman I, Corporal in January of 1916 and Sergeant in July.

On 1 April 1918, the Royal Naval Air Service and the Royal Flying Corps amalgamated creating the Royal Air Force and Francis was transferred as a Sergeant Mechanic to the Royal Air force at the same time.

He embarked to France on 20th June 1918 and remained there on active service until he injured his right foot and was admitted to the 6th Stationary field hospital on 31st January 1919. After a short stay in the 56th General Hospital in Etaples he was transferred to England on 7th February 1919 and admitted to the military hospital Endell Street, Covent Garden, London. He was later transferred to RAF Halton, Buckinghamshire where there was an air mechanics training school. He was discharged from the RAF on 11th February 1920 as being surplus to military requirements having suffered impairment since entry into service. He was awarded the British War Medal and the Victory Medal.

He married Alice Key in 1926 in Barnsley, Yorkshire. There were no children.

Interestingly, his service record shows he was a member of the Plymouth Brethren who were, and still are, a conservative, Low Church, nonconformist, Evangelical Christian movement. Among other beliefs, they hold the Bible as their sole authority in regard to matters of doctrine and practice.

The movement began in Dublin in the late 1820s with a group of men who felt that the established Church had become too involved with the secular state and abandoned many of the basic truths of Christianity. The first Brethren assembly in England was established at Plymouth in 1831 which is why they are often called Plymouth Brethren. In the late 1840s the Brethren split into the Open Brethren and the Exclusive Brethren.

The Exclusive Brethren are more extreme in their beliefs and practices and will often separate themselves from non Brethren. We don’t believe this was the case with Francis so it is probable he was a member of the Open Brethren, as their assemblies functioned as networks of independent local churches because in the 1939 register Francis was living with his wife Alice in Bridlington, Yorkshire and was a minister of an independent Evangelical church.

In his letter of resignation to R. E. Womphrey dated 13th April 1922 it is apparent he has come to the realisation that Freemasonry is not a religious organisation:

Please take note that I hereby declare that I absolutely refuse to acknowledge in any way shape or form, any connection whatever with Free Masonry, or its lodges, also to support it by payment of any description being confident that the whole thing is not of God and best left alone.

Therefore will you kindly prevent any further supply of notices or literature being forward to me, and thus save any waste of time and postage.

Francis died at the age of 57 in Staincross, Yorkshire. 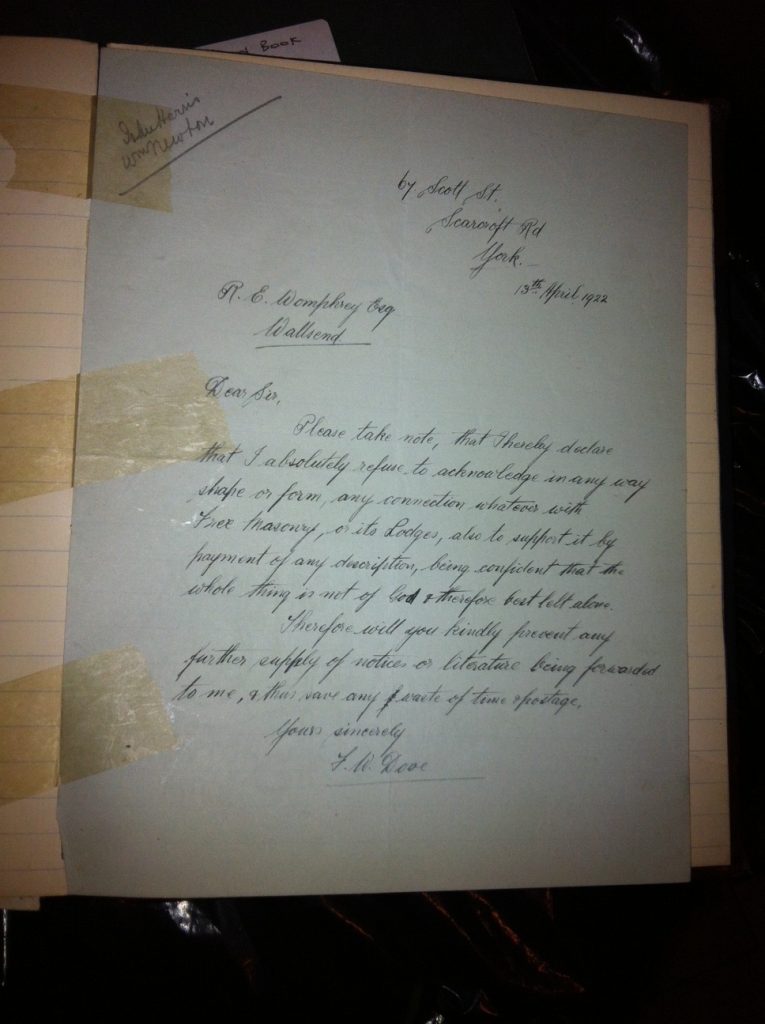