Andrew was proposed as a fit and proper person to be made a Freemason by Wbro John Armstrong PM, PProvGSW and seconded by Wbro John Harris PM at the Lodge Temperance 2557 meeting held at the Assembly Rooms on 18th November 1918. He was a 35 year old Engineering Lieutenant, Royal Naval Reserve residing at his brother, William’s home at 43, Gainsborough Grove, Arthur’s Hill, Newcastle upon Tyne. Andrew’s Brother William Frisken was also a freemason being initiated into Lodge Temperance 2558 in March 1916 and is also listed on our WW1 Roll of Honour.

Andrew was born on 19th February 1883 in Orphir, a village and a parish in the South of Orkney, six miles north of the Scottish mainland, the son of William and Jessie Frisken. William was a miller born in Orphir and living in the Kirbister mill cottage with his wife Jessie Liddle, a farmer’s daughter also from Orphir. Kirbister Mill was a 2 1/2 storey meal mill built from random rubble with a slate roof. The mill would have had 2 kilns and 2 waterwheels, for milling and threshing respectively. William and Jessie had at least 6 children including: 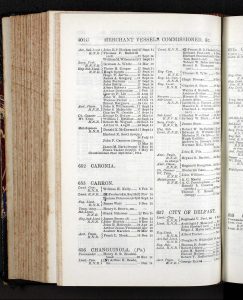 commission of Assistant Engineer, Royal Naval Reserve (RNR) on board the HMS Changuinola. Originally built as a merchant ship in 1912 and called the Carl Shultz , it was commandeered by the Government in 1914 and converted to an armed merchant cruiser and renamed HMS Changuinola. It was employed on patrol and later convoy protection being armed with 6 – 6” 2-3 lb guns and operated between December 1914 to January 1919 with the 10th Cruiser Squadron Northern Patrol. Andrew was granted a further commision of Engineer Lieutenant on 26th January 1916 until 4th June 1919 when his commission was cancelled. His home address was given as 43, Gainsborough Grove, his brother William’s home, which was later changed to his parent’s address in Bendingo, St Ola, Orkney. He was awarded the 1914 -15 Star, the Victory Medal and the British War Medal for his service in the war. 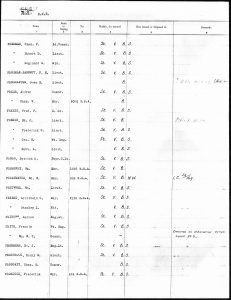 Andrew married Isabella Spence Guthrie on 18th June 1926 in Leith, Edinburgh and set up home with her at 32, Cambridge Avenue in Leith. Isabella, known as Ita, was a prominent member and one time Treasurer of the Edinburgh, Leith and District Orkney Association.  It’s not known if they had any children.

Andrew continued at sea with the merchant navy on merchant ships such as the S.S. Alcira, Almenora, Dundee, and Alhama. At the outbreak of the 2nd World War he was Chief Engineer Officer of the S. S. Alpera a British Cargo steamer built in 1920 by Grayson, Garston, England as the SS Coria a Spanish cargo steamer. In 1923 she was renamed SS Cabo Del Agua and in 1924 the SS Alpera. On the 22nd May 1943 she was bombed and sunk by aircraft when 15 miles off Cape St. Vincent. As a result of Andrew’s bravery in trying to save the ship, he was awarded Lloyd’s War Medal for Bravery at Sea on 22nd May 1943 and an OBE in November 1943.

In 1939, with the coming of World War II, Lloyd’s of London set up a committee to find means of honouring seafarers who performed acts of exceptional courage at sea. The Lloyd’s War Medal for Bravery at Sea is one of the four medal types bestowed.

The London Gazette of 23rd November 1943 reported Andrew had received a commendation for his bravery to be an officer of the Civil Division of the Most Excellent Order of the British Empire (OBE). This was reported in the The Scotsman  the following day on 24th  November 1943.

Attempt to Save Ship

Their ship, sailing in convoy, was attacked three times by two enemy aircraft. Despite the defensive action taken, bombs were dropped near the ship. As a result of these close misses the engine room was flooded and the engines stopped. Attempts were made to tow the vessel, but the tow parted and, as she was rapidly flooding and the weather was deteriorating, the crew were taken on board the towing ship. A few house later the master and the chief engineer officer reboarded the ship in a further attempt to save her. Towing again attempted by a tug, but the ship sank shortly afterwards.

The master displayed great courage and leadership throughout, and made a gallant and determined effort to save his ship. Under his orders temporary repairs were effected and the ship was prepared for towing despite the dangers of a further air attack and the knowledge that she might sink at any time.

The chief engineer officer was conspicuous by his courageous devotion to duty. At considerable risk he went down into the flooded engine room and shut the tunnel door and main inter-valve, although the heat and steam made this an almost impossible task. He set an outstanding example on this and on may previous occasions, when he performed excellent work in effecting temporary repairs in circumstances of great difficulty and danger.

Sadly, Andrew died as a result of his injuries on 2nd January 1945, aged 61 at his home in 32, Cambridge Avenue, Leith. He is buried at Orphir Cemetery, Orkney Islands and the inscription on his gravestone reads:

He is also commemorated by the Commonwealth War Graves Commission