Leonard was proposed as a fit and proper person to be made a Freemason by Bro Thomas Strong and seconded by Bro J. T. Bowson at the Lodge Temperance 2557 meeting held at the Royal Assembly Rooms on 16th July 1917. He is shown as 23 year old Lieutenant Leonard Usher with the 2nd Canadian Army Reserve, residing at 186, Front Street, Chester Le Street. This entry was later amended and his military details struck through so he becomes Mr. Leonard Usher, bank clerk. A successful ballot was held at the regular meeting on 20th August 1917.

He was initiated into the mysteries and privileges of Ancient Freemasonry on 29th November 1917 and at the regular meeting held on July 22nd 1922 the Secretary announced he had received a letter from the Grand Secretary of the Grand Lodge of Alberta, Canada certifying that Bro Leonard Usher and been passed to the Fellowcraft degree at the Bow River Lodge No 1 on 17th August 1921. Formed on 28th January 1884, under the authority of the Grand Lodge of Alberta, Bow River Lodge No.1 AF&AM meets in Calgary, Alberta, Canada, and is the oldest Masonic Lodge in Alberta. He was raised to the Sublime degree of a Master Mason a year later on the 18th September 1922 at Lodge Temperance 2557. The long gaps between his degrees can be explained by his military service which is covered later.

Bro Leonard in the Merchant Navy

On the 20th January 1908, at the age of 14, he entered into a 3 year indentured apprenticeship in the Merchant Navy in Newcastle upon Tyne and on completion he shipped to America and then worked his way to Banff in the Province of Alberta, Canada, where he went to work as a clerk with the Royal Bank of Canada.

Leonard enlisted with the Canadian Expeditionary Force in Toronto on 4th December 1914 shortly after the outbreak of the Great  war. He was assigned as Private, regimental number 72 with the 2nd Divisional Cyclists Corps.

Private Leonard left Montreal on 16th May 1915 with the first draft of the 2nd Divisional Cyclists Corp bound for England on board the S.S. Corinthian arriving 11 days later on the 27th May. Shortly after his arrival in England in September he was promoted to Lance Corporal. The Cyclists were part of the Second Canadian Division under direct command of Divisional Headquarters, and during the summer of 1915 were based at Shorncliffe Camp, Kent for training before embarkation to France .

The Cyclists had a very intensive course which consisted of musketry, bombing, and bayonet fighting alongside the highly specialized role of learning signalling and topography techniques, range-finding, tactics and the use of Lewis guns. In the early years of the war, the Corps carried out traffic control, sapping and mining, trench guide, listening posts, battalion runners and despatch riding duties. 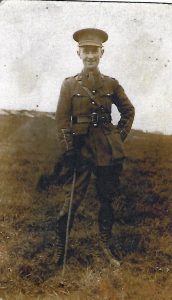 The 2nd Cyclists landed in France on 15th September 1915 and in November 1915 while with his unit near Westoutre, Western  Flanders on the Ypres Salient, a high explosive shell fell about 30 feet away, blowing him through the door of a house and up against the opposite wall. The immediate effect was severe pains around the throat and up through the ears. He reported to the casualty clearing station and had his ears syringed but remained deaf for four days and his hearing remained impaired from then on.  The only reference in their war diaries to enemy action in November was on the 9th when there was heavy bombardment in the outpost of Kemmel.  The following day, 2 men were relieved from Kemmel so it’s possible Leonard was injured there, but no names are mentioned.

He left France on 16th September 1916 with recurrent ear problems and returned to Shorncliffe Camp in Kent assigned to the Canadian Engineers Training Depot pending his appointment to the commissioned rank of Lieutenant which he received on 24th January 1917. He was posted to the 4th Reserve Battalion at the Crowborough Camp, West Sussex on 14th March 1917, and the Canadian Reserve Cyclists in the Canadian Camp at Shoreham on 10th July 1917 which had become a base for the large Canadian Expeditionary Force in the previous autumn. 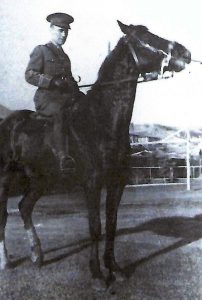 Since the shell explosion, there had been ongoing issues with his left ear with pain and intermittent discharge which appears to have got much worse, because in September 1917 he was admitted to the 2nd Eastern General Hospital in Brighton where he remained for over a month receiving treatment which mainly consisted of syringing.  He was diagnosed with chronic otitis media – an infection of the middle ear that causes inflammation and a build-up of fluid behind the eardrum. His right ear, although affected was less painful with not as much discharge. Infection was a major killer in the war and it must be remembered that antibiotics wouldn’t be available for another 26 years so after appearing at a Medical Board in Seaford, East Sussex he was finally invalided to Canada for further treatment. He sailed on the hospital ship S. S. Braemar which left Liverpool for Montreal on the 16th December 1917 just seventeen days after he was initiated into Freemasonry at Lodge Temperance 2557. 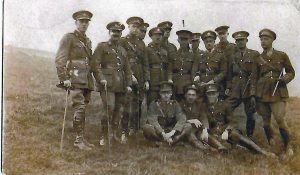 On his return to Canada he was assigned to the headquarters of the Military District Depot 13 in Calgary, Alberta which covered the Province of Alberta and the Territory of Mackenzie and was eventually transferred to their General Staff. It was during this time he was promoted to Captain and worked as an Intelligence Staff Officer. In September 1919 he appeared in front of a Medical Board and was recommended for medical discharge and demobilised. He was awarded a life pension from the Canadian Government for his Army Service.

Leonard returned to England and his parents’ home in Chester Le Street in 1921 on board the White Star Line’s S. S. Megantic which docked in Liverpool on the 16th October and joined his father’s business of auctioneers and valuers.

Leonard was born in Chester – Le – Street, Co. Durham on 1st October 1893 to Joseph Grundy and Hannah Usher. Joseph Grundy Usher (1865 -1935) born in Eighton Banks, Gateshead was from a family of miners and started his working career underground as a putter, a boy who pushes mine waggons from the working place to a horse road or mechanical haulage road. He went on to be an auctioneer in Chester Le Street and set up the family business, J G Usher and Son, auctioneers and valuers. He married Hannah Smiles in 1890 and they had four children.

Leonard married Amelia Smith a Chester Le Street girl, the daughter of a local wholesale merchant in 1928. They had one son Peter Smith born in 1931. Both Leonard and Amelia would become pillars of the Chester Le Street and north Durham community. 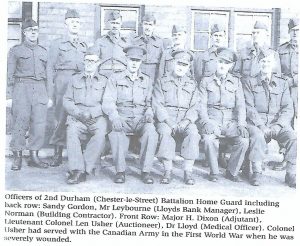 In 1939 Leonard was a special constable with the Durham Constabulary and at the outbreak of World War 2, was awarded the rank of Lieutenant Colonel and as acting Colonel formed and commanded the 2nd Durham (Chester-Le-Street) Battalion , Home Guard.

On 13th May 1958 he was commissioned as Deputy Lieutenant of the County of Durham by the Lord Lieutenant and for more than 30 years was a magistrate and Justice of the Peace for Chester Le Street and a member and President in 1933 of the Rotary Club of Chester-Le-Street becoming District Governor of Rotary International.  On top of everything else  he also served for 30 years as a local Independent Councillor on the Chester le Street Urban District Council. A very busy and dedicated resident of Chester Le Street.

It’s worth noting he was lifelong friends with Bro David Askin Edgar another of our members who served in the Great War.

Many thanks to Leonard’s son Wbro Peter Smith Usher JP PPGJW and Past Master and member of Eardulph Lodge 6645 for all the information and photos of his father.