This biographical sketch, photo and images are taken from the Institution of Engineering and Technology, Electrical Engineer WWI and WWII Rolls of Honour, 1924, 1949. These publications list members of the organisation who died in World War I and World War II with biographical sketches and portraits. The following is a transcription of the pages below. 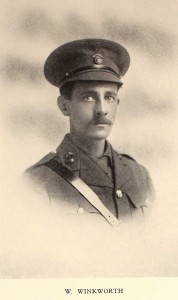 He was educated privately and at Rutherford College, Newcastle-on-Tyne (1895—1896). On the completion of his general education, he was, in January, 1897, apprenticed as a Pupil with Messrs. J. H. Holmes & Co., of Portland Road, Newcastle-on-Tyne, Manufacturing Electrical Engineers, and served in that capacity until September, 1903; during this period he passed through the Electrical and Testing Departments at the firm’s Works. In 1900, whilst still an Apprentice, he enrolled as a Student at the Armstrong College (now a part of the University of Durham), Newcastle -on-Tyne, and concurrently attended evening classes in electrical engineering subjects: he was awarded prizes in Electrical Engineering in 1900, 1901 and 1905.

He was, on the termination of his apprenticeship in 1903, engaged by Messrs. J. H. Holmes & Co., and employed as a Tester in the Motor-Testing Department. His responsibilities were later increased, and, in May, 1905, he was appointed Assistant to the Chief Tester; he was promoted to the position last named in October, 1912. He relinquished his appointment with Messrs. Holmes & Co. in August, 1914, on the outbreak of war, in order to serve in the Army.

He had, early in his professional career, taken an interest in the Volunteer movement, and, in 1906, enrolled in the Tyne Division Submarine Miners, Royal Engineers (Volrs.). On the creation of the Territorial Force in 1908, in connection with Lord Haldane’s Army Reorganization Scheme, he transferred to that Force, and, on the formation of the Tyne Electrical Engineers, Royal Engineers (T.F.) was posted to this unit, in which he attained the rank of Corporal; he resigned from the Force in 1913 on completing five years’ service therein.

He enrolled in the Leeds University Officers’ Training Corps on August 5, 1914, and proceeded with the Corps into camp at Seaton Delaval, Northumberland, where he was put through a course of military training. He was given a Commission in the Territorial Force in March, 1915, and posted to the 2/5th Battalion The Northumberland Fusiliers an unattached unit, which for a short time was one of the battalions of the ‘88th Infantry Brigade of the 63rd (Northumbrian) Division. He was employed on Coast Defence duties with this unit at Walker and Seaton Delaval (Northumberland), and at Hollingside, Co. Durham, until he was sent overseas.

He proceeded to France on July 9 with a draft for the 1/5th Battalion of his Regiment, at the time one of the battalions of the 149th Infantry Brigade of the 50th (Northumbrian) Division. This Division had crossed to France in the middle of April, 1915, and its 149th Infantry Brigade had, within a few days of its arrival at the Front, gone into action at the Battle of St. Julien (April 24 — May 4 ), where it had behaved splendidly in the crisis of the German Gas Attack. When he joined his new unit, his Division was in the Command of the II Corps, which then lay in the Second Army area, and stationed in the Armentières Sector. His Division was at the time on the right of the II Corps front and made junction on its southern flank with the Canadian Division, which formed the left flank of the III Corps. Immediately to the north of the II Corps, the British line was held by the V Corps: on the front of the latter Corps, the enemy, from time to time, showed considerable activity (Actions of Hooge—July 19 and 30, and Aug. 9); otherwise, there was a period of relative calm during the later days of the summer of 1915. Raids and reconnaissances were, however, being frequently carried out along the front held by the II Corps. On the evening of August 25, he was directed to carry out a night reconnaissance in the neighbourhood of Houplines, and accordingly led his Platoon out of the trenches into No Man’s Land to accomplish the duty assigned to him; whilst he was feeling his way forward the enemy put up flare lights and thus located his command. The Germans then suddenly opened a heavy machine-gun fire on his detachment and he was hit in the abdomen and the right arm. He was conveyed at once to the Military Hospital at Bailleul, where he succumbed to his wounds on the following day.
Age: 32 years 11 months. Unmarried.

“By this time you will have received the sad news of your poor son’s death, and I, as O.C. 5th Battalion, tender you my deepest sympathy. You have lost a good son, a man to be proud of, and you have some consolation in the fact that he died nobly.

“Every one, officers and men, admired and respected him since he joined us some six weeks ago, and we all mourn his loss.

“Your boy was doing some important patrol work in front of our trenches when he was shot in the body. He was then some hundred yards away and absolutely refused to return until he had had his own back, but Sergeant Coppick, who saw he was badly wounded, carried him back until met by the stretcher party.

“My doctor told me he was one of the bravest men he had seen.”

“Will you please accept my deepest and most heartfelt sympathy with you and your wife and family in the great loss you have sustained in the death of your dear son.

“I cannot tell you how much I regret his early decease. He was such a fine fellow and a great credit to the Battalion, who all mourn his loss.

“Major Luhrs wrote to me saying he had sent you full particulars and spoke in the very highest terms of your son in every way, whose character and abilities were outstanding.

“From what I saw of him before he left for the front, I knew that he would make an exceptionally good officer, and the various officers who have written me all bore testimony to this effect.

“I trust God will strengthen and comfort you all in your great sorrow, and trust the knowledge of his patriotism and sacrifice for his country will be, in some measure, a solace to your grief. Such men can ill be spared just now.

“Again assuring you of my sorrow for you all, and of my appreciation of his worth and the good services he rendered to his country.”

He took a very keen interest in the Boy Scout movement and in the welfare of young lads. For sixteen years he taught in the Sunday School, and for some years commanded the Church Lads’ Brigade in connection with St. Gabriel’s Church, Heaton, Newcastle-on-Tyne: this Brigade was dissolved in 1910, on the formation of the 19th (Newcastle) Troop of Boy Scouts. He became the first Scoutmaster of the latter Troop, which was a very successful unit, being one of the best in the Newcastle-on-Tyne District. In January, 1914, he was appointed District Scoutmaster for the East Section of Newcastle and held this office until he was commissioned in the Army. In August, 1914, at the outbreak of war, he organized the Special Service work for Scouts at the Boy Scouts’ Headquarters, Newcastle-on-Tyne, supplying boys to the various Hospitals, Schools, Food Depots, etc.; this Special Service organization comprised some 500 Scouts.

“I must write you a few lines to say how dreadfully sorry I was to receive the announcement from you of the death of your noble son.
“You will have the consolation of knowing that he died the most honourable of deaths, and that he has cheerfully given his life as a sacrifice for his country, and that you have shared that sacrifice.
“Your son’s record has been a splendid one, and with becoming modesty he was always eager to help on the rising generation, and I was always greatly struck by the great influence unconsciously wielded, and I know that there are many men who still mourn his loss and miss his ever ready assistance.
“May the Lord comfort you in your hour of trial.” 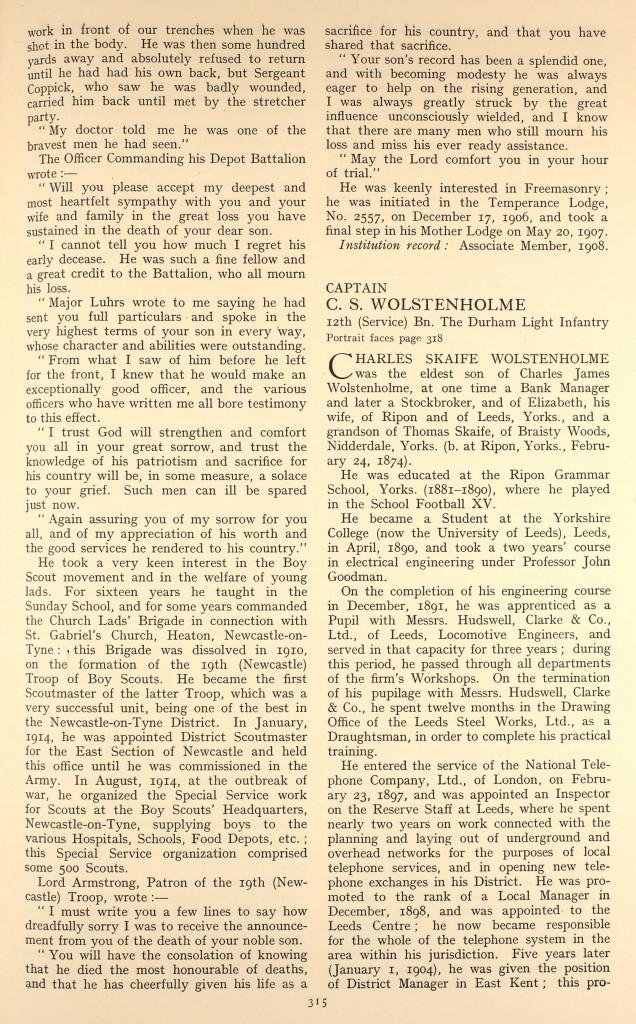 Photo and images courtesy of the Institution of Engineering and Technology Archives, Savoy Place, London, England.