William John Kerr was a Freemason and member of Lodge Temperance 2557 which at the time was meeting at the Royal Assembly Rooms, Westgate Road, Newcastle Upon Tyne.

William enlisted twice in the Army first joining the 46th F. B. Royal Field Artillery in Glasgow on the 28th April 1889. His service record shows William, No RA 72851, had a somewhat turbulent time before being discharged on the 1st April 1902. He served six years in India where he was tried and imprisoned for 15 days in April 1891 for “disobeying in such a manner as to show wilful defiance of authority”. The following month, May 1891, he was tried and imprisoned for “one year for using insubordinate and threatening language to his superior officer”. He served 276 days of this sentence before being released. He had a further run in with authority in October 1896 when he was imprisoned with hard labour by his C. O. for 10 days. In 1894 he suffered from a fracture of the right forearm caused by a fall from his horse while on duty but this did not interfere with his duties as a soldier. He also served around 18 months in South Africa without incident and at his discharge his conduct was said to be “latterly good”!

William’s second period in the Army started when he joined the Army Service Corps at the outbreak of WW1 on the 10th October 1914 as driver no T2 SR 01317. He was assigned to 122nd Company which was part of the 28th Division and served in Egypt and Salonika.

William was born in Mhow near Bombay in India and was the son of James and Agnes Kerr (nee Rickleton) who were married in Glasgow in 1865. His father James was born about 1839 in Lisburn, Northern Ireland and  is shown as a soldier in the 1861 census which may explain how William and his brothers Robert and George were born in India. Agnes was born about 1848 in Ayr, Scotland. James and Agnes had at least seven children including:

William was a seaman when not serving in the army and married Marion Chandler at the registry office in Tynemouth on 12th December 1898. In the census taken in April 1911 they were living at 123, Seymour Street, North Shields. William is shown as a “coal trimmer on board of ships”. They had at least three children including:

William was proposed by Bro. J. Goodman as a fit and proper person to be made a Freemason. He was a 33 year old Foreman trimmer living at 142, Howdon Road, North Shields. At the Lodge Temperance meeting of the 19th December 1904 he was initiated into the Mysteries and Privileges of Ancient Freemasonry. He was passed to the second or Fellowcraft degree on the 16th January 1905 and raised to the Sublime degree of a Master Mason on the 20th February 1905. He remained a subscribing member until 31st December 1926 when he was excluded from the lodge for being in arrears.

William is commemorated in Newcastle on Roll of Honour 1914-18 Lodge Temperance 2557 (NUT 254) and in North Shields on Plaque S. Africa 1899-1902 (N34.03) which was originally in the North Shields free library on Savile Street. It can now be seen at the Land of Green Ginger Shopping Arcade (in the former Tynemouth Congregational Church), Front Street, Tynemouth. 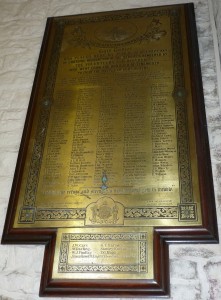