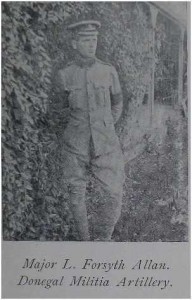 Lewis Forsyth Allan was a Freemason and founding member of Lodge Temperance 2557 which at the time the Lodge was formed in 1895, met at the Masonic Hall, Shakespeare Street, Newcastle-upon-Tyne, Northumberland, England. He was a Past Master from Tyne Lodge 991, where he was initiated with his brother Robert Edward on the 12th January 1888, passed on the 9th February 1888 and raised on the 8th March 1888.  –

The annual meeting of the members of Tyne Lodge (No 991) of Freemasons was held yesterday afternoon in the Masonic Hall, Wallsend. Bro. Wm. Bell, IPM, presided, and the business comprised the presentation of the annual financial statement, and the installation of Bro Lewis Forsyth Allan as WM. and the appointment of the following offices:- there follows a list of the officers which includes Geo. A. Allan, treasurer, PM, PPGJD no doubt Lewis’ father. The article continues in part – On the conclusion of the proceedings the brethren dined at the house of Bro. Cawthorn, the Anchor Inn. 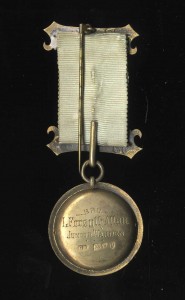 Lewis was the first Junior Warden of Lodge Temperance 2557 and was one of several brethren who provided items to the Lodge to ensure it started without dept,  donating a bible and cushion. He was very active in the formation of the Lodge, convening  the first meeting, preparing and presenting the petition to Grand Lodge and designing the founders jewel.

Lewis was born in Wallsend the son of George Awburn Allan and Isabella Wood who married in 1852 at All Saints Church, Newcastle Upon Tyne. They had at least nine children including:

Lewis’ father George Awburn Allan was an Alderman and Justice of the Peace. He was Mayor of Wallsend 1903-04 and Chairman of the Municipal Buildings Committee and presided over the opening of the Wallsend Town Hall on Wednesday 16th September 1908. He was variously shown as a Gentleman, manager of a gas works, firebrick merchant, manager of firebrick and cement works, agent for a water company and water-rate collector.  In 1855 he was Manager at Mr. Addison Potter’s Gas Works, which later became Walker and Wallsend Union Gas Co. He later became local agent for Newcastle and Gateshead Commercial Travellers Association. He was a prominent Presbyterian and, at one time, had been a missionary in Sierra Leone. He was also a Freemason and founder member of Tyne Lodge 991 in 1863, becoming Master of that Lodge in 1867. He was Treasurer of the Carville Lodge No. 2497 for five years, became Master in 1899 and was Director of Ceremonies for one year in 1901. On his death on the 5th January 1910, age 79, he left over £4000 to his daughter Grace Annie Allan and David Myles an Engine works manager.

Lewis entered the Royal Grammar School in Jesmond, Newcastle Upon Tyne in 1877 and was obviously a clever pupil because on leaving in 1883 went on to study at what was then Durham University’s College of Science, now Newcastle University. He continued his education at the Honourable Society of the Middle Temple, one of the four Inns of Court exclusively entitled to call their members to the English Bar as barristers, graduating in 1897. The Times reported that Lewis was called to the Bar in 1899. He served as a barrister on the North East Circuit.

Lewis married Emily Agnes Williams in 1891 in Machynlleth, Montgomeryshire. They had three children:

Lewis can be found in each of the Census returns up through 1891 when he is living with his parents at the Old Vicarage, Wallsend. He was on his travels after that as his wife and children are on their own in the 1901 and 1911 census. This would also account for the lack of reference to him in the Lodge Temperance 2557 minutes from about 1898 and 1899.

Second Lieutenant George Awburn Allan, 122nd Heavy Battery, RGA. who was killed on January 16 in France, was the eldest son of Major Lewis Forsyth Allan (Johannesburg, Transvaal) RGA, commanding Royal Artillery, Sheringham, and Grandson of the late Alderman G. A. Allan, J.P., of Wallsend on Tyne. He was born Duddingston, Edinburgh, on December 7, 1892 and educated at the Johannesburg College, and Bedford Grammar School, and was a student of the Middle Temple. Within a few years of the outbreak of war he joined in the Royal Engineers (T.F.) as a Sapper, and obtained his commission in the R.G.A. on November 19, 1914. His two brothers are serving in heavy batteries.

Lewis made a short trip in 1919 to visit his brother Robert in San Francisco, California. On his entry to the United States at Ellis Island he gave his son Arthur as his nearest living relative – “Son, Lieut. A.J.W. Allan R.G.A Knox Mission, Siberia.” The Knox Mission is a reference to Major General Alfred W. Knox, a former attaché in Petrograd, who was head of the British military mission in Siberia from 1918 to 1920. Arthur also attended the Middle Temple from May 1st 1915.

Lewis had an extensive military career starting with the 1st Newcastle Upon Tyne and Durham, Engineers Volunteer Corps. In December 1886 he was appointed Lieutenant moved to the 1st Edinburgh (City) Volunteer Artillery before joining the Engineer’s Corp. of the Donegal Artillery (Prince of Wales) (Southern Division) in 1897. The Newcastle Weekly Courant of December 6th 1890 reported that Lieutenant Forsyth Allan led the Red team in a War Game played at the North of England Volunteer Service Institution, Grey Street, Newcastle. Red team prevailed.

At the outbreak of the Boer War he was a Lieutenant in the Donegal Artillery (Prince of Wales). Extracts from letters he wrote during the Boer War were published by the Royal Grammar School in Pro Patria: stories of service in South Africa 1899-1902, Novocastrian, First Special Number, 1902. He recalls how he was mobilised for war service: “It was the latter part of January 1900. I had just received the London papers, and was sitting in my chambers discussing the war with two friends, when a wire arrived, that rather caused a flutter. It was from the adjutant of my regiment: “Will you take duty with a Service Company, R.A. for service at home or abroad?” I replied “certainly.” The next week saw me on duty at Scarborough with the No. 2 Depot Western Division Royal Garrison Artillery. I had been there a month, when I was ordered to join my own regiment at Letterkenny, Ireland on the 12th March 1900, as we were mobilising for war service…………I had been appointed Adjutant of the Irish Brigade Division Militia Artillery and had plenty of work to do, as kind friends had smuggled bottles to the men, who were ready to fight anything or anybody. The Transport Umbria, a fine Cunarder, brought us out. There were, roughly speaking, 200 officers and 2,100 men aboard…..”

His service in South Africa was said to be both varied and brilliant. On the 26th March 1900, he was seconded to the Royal Artillery and appointed Adjutant of the Irish Brigade Division Militia Artillery. He was mobilised for active service and landed in Table Bay, South Africa on Easter Sunday 1900. On June 6th he was promoted Captain, on November 22nd was granted the honorary rank of Major and from then until the 12th January 1901 was in command of the Artillery in Kimberly. While there he met with rather a bad accident, being thrown from his horse, and was in hospital for 11 weeks before he returned to his command. On April 4th he was made Commandant of the Modder River District and in May was appointed to be Legal Adviser and Assistant Provost Marshal Kimberley District under Major-General Sir G. T. Pretyman, K.C.M.G., C.B. He conducted the prosecutions in the Military Courts, was in charge of Prisoners of War, undesirables and refugees and administered martial law in the district.

His Royal Grammar School biography shows he remained in South Africa after the Boer War ended in 1902 and gives some insight into his career – Public Prosecutor in Victoria; Resident Magistrate in several cities; assistant Crown Prosecutor in the Witwatersrand High Court; member of Transvaal Parliament in 1910. He maintained his connection with the Army and was transferred to the Donegal (Prince of Wales’s) Royal Field Reserve Artillery in August 1908 and then to the Special Reserve of Officers as Captain and Honorary Major  in 1909.

In the Lodge Temperance 2557 minutes of May 1901 the congratulations of the brethren are recorded to Bro Forsyth-Allan on his being promoted to the rank of Major. The minutes of August 19th  1901 mention a letter received stating he had attended the “Henry B. Loch” Lodge no 2383 in Kimberly and witnessed Bro Worthington being raised to the Third Degree. A year later in 1902,  a letter of congratulations was sent on his appointment as Resident Magistrate of Pretoria.

He continued his association with Freemasonry in South Africa and on the 2nd February 1905 was a founding member of Norwood Lodge No. 3149 under the Constitution of the United Grand Lodge of England. He was installed as the first Worshipful Master on 7th October 1905 also serving as Master the following year. His contribution to Norwood Lodge and Freemasonry in South Africa was significant, occupying various Offices within Norwood Lodge and serving as Master again in 1921. He was responsible for the design of the Crest of the Lodge and while the Lodge has no explanation for the design, they believe it was derived from the Allan family coat of arms. Shortly before becoming a founder of the Norwood Lodge, on the 1st June 1905 he was one of the founding members of the Civil Service Lodge No. 3118 and on the 31st October 1905 a founding member of Outpost Lodge No 3132 again both under the English Constitution. He was also a member of a number of committees of District Grand Lodge, Transvaal, holding the position of Past District Grand Warden.

At the Annual Meeting of Lodge Temperance in 1909 a letter of resignation was recorded from Bro. Lewis Forsyth-Allan, P.M. and Founder living in South Africa, he was granted honorary membership of the lodge. In December 1922 the lodge acknowledged the appointment of Bro Lewis Forsyth-Allan the first Junior Warden, as Mayor of Johannesburg.

His military service continued during World War 1 and his Medal Roll shows him as Major, Royal Garrison Artillery (Reserve of Officers) and posted to France on April 13th 1916. His biography also mentions the  award of the Order of Stanislaus, 3rd Class with sword in 1916, although it’s unclear how or why he received this honour.

Perhaps the highlight of  his political career was his election as Mayor of Johannesburg 1922- 1923.

Lewis is remembered in Newcastle Upon Tyne on the ROH 1899-1902 Royal Grammar School Photos 23-32 (J1.23b) which can be found on the North East War Memorial Project website here. 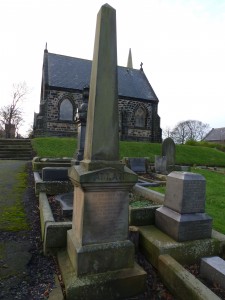 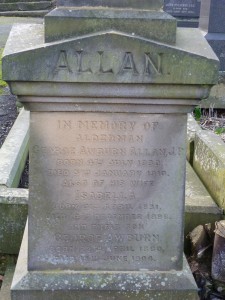