Harry was proposed by Bro David Octavius Skilling and seconded by Bro John Armstrong as a fit and proper person to be made a Mason at the Lodge Temperance 2557 meeting held in the Assembly Rooms, Newcastle upon Tyne on the 20th October 1913. A successful ballot was held the following month, on 17th November 1913, and he was initiated into the Mysteries and Privileges of Ancient Freemasonry on 15th December 1913. On the 19th January 1914 he was passed to the second or Fellowcraft degree and raised to the Sublime degree of a Master Mason on 20th April 1914. He signed his Grand Lodge certificate on 15th June 1914. He was recorded as a 28 year old decorator living at 2, Poplar Crescent, Gateshead.

Unfortunately the service and pension records for Harry’s time during the war can’t be found so are likely among the 60% of the Service Records irretrievably damaged or lost completely as a result of enemy bombing in 1940. There are many Harry Levene’s listed in the medal index cards and rolls but without an idea of his service it’s not possible to confidently identify him. Sadly, we know his younger brother Israel Levene served with the 219th Field Company of the Royal Engineers as a Sapper but died from wounds on 24th November 1917 and is buried in Duisans British Cemetery, Etrun, France.

Harry was born on 15th January 1887 in Sweden to Joel and Sarah Levene. Joel was a Russian Jewish immigrant born in Swalk, Poland to Israel and Rebecca Levene, both Russian subjects. It’s likely that Joel married Sarah Bernstone (or Bernstein), also a Russian subject, in Sweden around 1881 or 1882 as their first three children; Anne, Rachel and Harry were all born there. They moved to Gateshead, Co. Durham with Joel’s mother Rebeca and Sarah’s mother Mindell Bernstein around 1888 and by 1901 were living in the Bensham area of Gateshead. Bensham is now the home to a large orthodox Jewish community and Joel and Sarah would have been one of its earliest residents. Joel became a naturalised British citizen in 1904. Joel and Sarah had thirteen children:

Joel was a painter and decorator by trade and by 1914 had a paper hanging (wallpaper) dealers on Gateshead High Street. Harry, Max, Lewis, Jacob and Abraham all worked in the business and became successful painters and decorators in their own right. Joel died in 1930 leaving £12,228 in his will.

We know that Harry had his first wallpaper shop on Coatesworth Road, Gateshead followed by shops on Shields Road, Byker and in Whitley Bay next to the New Coliseum. The family also had “Levene’s Wallpaper House” with shops in Newcastle, Gateshead, South Shields and Darlington which finally closed in 1964.

In 1939 Harry was a “master decorator” living in Wolveleigh Street, Gosforth and although in the register he is shown as married, his wife is not present and we’ve not been able to identify her. It’s not known if they had any children. 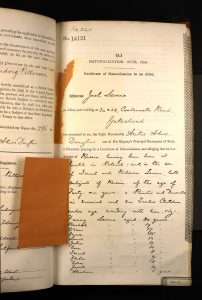