Frederick William Embleton was a Freemason, member of Lodge Temperance 2557, a Corporal with the Royal Army Service Corp and one of our forgotten war heroes. He is not listed in the Lodge Temperance WW1 Roll of Honour although the Lodge registers show he was on war service.

Frederick was proposed by Bro James Hope and seconded by Bro Frederick W. Simmons as a fit and proper person to be made a Mason at the Lodge Temperance 2557 meeting held at the Assembly Rooms, Newcastle upon Tyne on the 18th October 1915. He was recorded as a 22 year old Master Baker living at Glenariff House, Heaton Road, Newcastle upon Tyne. A successful ballot was held on the 15th November 1915 and he was initiated into the Mysteries and Privileges of Ancient Freemasonry on 20th December 1915. On the 17th January 1916 he was passed to the second or Fellowcraft degree and raised to the Sublime degree of a Master Mason on 21st February 1916.

On 15th March 1920, Bro Frederick went on to become a joining member of John Page Lodge no 3619 which met at the Masonic Hall, Maple Street, Newcastle. It was granted its warrant on 31st July 1912 and consecrated on 18th September 1912.  Sadly, Bro Frederick chose to resign from Lodge Temperance in October 1922.

The service and pension records for Frederick’s time during the war can’t be found so are probably among the 60% irretrievably damaged or lost completely as a result of enemy bombing in 1940.

Fortunately, the Newcastle Absent Voter’s list for 1919 lists Frederick at his parent’s 314 (Glenariff House), Heaton Road. He is a corporal with the Army Service Corps in a Mechanical Transport Company with service number DM2/171639 attached to the 193 Siege Battery Royal Garrison Artillery, 403 Company. The DM2 prefix to his service number indicates he was initially a Driver Mechanic 2nd Class.

Siege Batteries of the RGA were equipped with heavy howitzers, sending large calibre high explosive shells in high trajectory, plunging fire. The usual armaments were 6 inch, 8 inch and 9.2 inch howitzers, although some had huge railway or road-mounted 12 inch howitzers. Siege Batteries were often employed in destroying or neutralising the enemy artillery, as well as putting fire down on strong points, dumps, stores, roads and railways behind enemy lines. 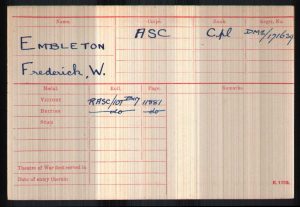 These heavy armaments with attendant equipment and ammunition, needed motorised transport to haul them and the Mechanical Transport Companies of the ASC served this purpose. The 193rd Siege Battery Royal Garrison Artillery was first overseas in France on 23 November 1916. Frederick was awarded the British War Medal and Victory Medal in recognition of his service during the war.

Frederick was born in Newcastle upon Tyne on 2nd May 1893 the son of Matthew and Jane Embleton. Matthew from Newcastle was a master baker who married Jane Pearson from Walsall, Staffordshire in 1886. They had 6 children:

Frederick’s grandfather Richard Embleton was a flour merchant and started R. Embleton Ltd and by 1889 had four premises located in Westgate Road, Westmoreland Street, Scotswood Road and Shield Street in Newcastle. In addition to being a company of flour dealers they were also bakers and confectioners and when Frederick’s father, Matthew, joined the company became R. Embleton & Son Ltd.

Wards directory of 1915-16 shows R. Embleton & Son Ltd with eight premises with the additional four located at City Road, Oxford Street, Sandyford Road and Second Avenue, Heaton. By 1937 they had consolidated into 4 premises in City Road, Westgate Road, Scotswood Road and Sandyford Road and Frederick, his brother Richard Stanley and father Matthew were all working for the company.

Frederick married Martha Humble in 1923 in Newcastle and they had at least one son William F. Embleton born in 1924 although the records indicate the child died in infancy.

Frederick’s mother Jane died on 25th April 1939 leaving £3435 in her will to Frederick and his brother Richard. Frederick’s father Matthew died on 11th June 1942 leaving £105269 in his will (equivalent to about £5 million in today’s money) to Frederick and Richard. It’s also worth noting that Frederick’s paternal grandfather Richard Embleton, the founder of R. Embleton Ltd, died on 13th August 1907 and left nearly £18,000 to his three sons, including Matthew which is equivalent to around £2 million in today’s money. Not a bad return for a few loaves of bread! 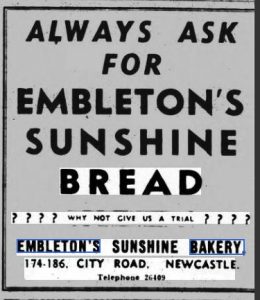 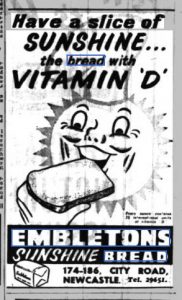 They started baking Mother’s Pride bread in the 1960’s for Rank Hovis McDougall. Their main bakery and confectioners was in City road, Newcastle next to the Tyne-Tees Steam Shipping Co. Ltd offices – now the Hotel Du Vin – until a new bakery was opened in 1964 in Westerhope, Newcastle Upon Tyne. Claimed to be the most modern in Europe, it increased production with higher standards of hygiene and centralised production of the former bakeries in City Road and South Moor and a depot at Gateshead. The company eventually closed in July 1979.

The Newcastle Evening Chronicle of 22nd December 1951 reported his death:

Died at Birthday Party
While attending a 21st birthday party in a Newcastle hotel on Saturday evening, Mr. Frederick william Embleton, aged 58 of 20 Burdon Terrace, Newcastle collapsed and died.
Until his retirement a year ago, Mr Embleton, who was a prominent Freemason, was managing director of R. Embleton and Son Ltd., the Newcastle bakers, the firm his father founded 70 years ago.
Mr. Embleton had recently been in Jamaica for health reasons and was contemplating another visit. He leaves a widow.