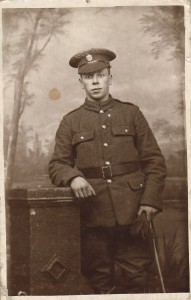 Norman Walter Brodie was born  in Consett, Co. Durham to Robert John and Isabella Brodie (nee Patterson) who were married in Consett in 1891. They had three children including:

Norman’s father, Robert John Brodie was the son of Adam and Tamar Brodie, an accountant; Robert was variously a fishmonger, theatrical agent, engine driver and towards the end of his life a bookkeeper. 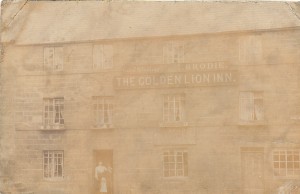 Norman grew up at the Golden Lion in Corbridge, his Mum, Isabella was the license holder and provider of “good stabling” there. The Golden Lion at that time was owned by her uncle, Richard Murray. The photograph shows Norman, his Mum Isabella and little Marjorie so must be dated about 1902.

Norman married Kate Elizabeth Danby at St Albans Church, Windy Nook, Gateshead in 1914.  Kate, (known as Kitty) having been adopted by George and Jane Dunwoodie, took their surname.  George Dunwoodie was a very successful builder and a “pillar of Presbyterianism” in Stanley as well as being a very active member of the Coronation Lodge 2929 in Stanley.  Local newspaper reports of the time described it as a “very pretty wedding”. Sadly both Kate’s adoptive parents died before she was married.

Norman and Kitty had five children:

Norman Walter Jnr served in WW2, Royal Navy, notably the Arctic Convoys and D Day landings as an ASDEC Operator on board HMS Scourge, one of two pathfinders to cross the Channel on the 5th June 1944.

Growing up at the Golden Lion, Norman spent a lot of time with horses and consequently was an experienced rider so it’s no surprise that when he joined the army in 1914 he migrated towards a mounted  position. Norman joined the Army Service Corp 263 Company 56 Supply Column Mechanical Transport Branch in 1914 his army service number was MC 148083, the MC denoting motor corp.  However, despite being in the motorised section he spent most of his time on horseback, all the photographs show him wearing jodhpurs rather than the more normal trousers. He was probably a mounted runner or carried orders on behalf of Corps HQS on horseback; both of these jobs would have taken him in to areas subjected to enemy shelling.

Sometime early in 1918 he was badly injured and was sent, after hospitalisation in France, to the Red Cross Hospital in Duffield near Derby where he was a patient in April of that year; he was then sent to Randalstown in Northern Ireland, a Command Depot. Command Depots were military convalescent camps for the rehabilitative training of soldiers too fit for convalescent camp but not yet fit enough to be returned to their unit.  On a post card to his wife dated 23 August 1918 he said “I’m alright, so don’t worry, I’m still in bed, this hospital is a very nice place”; as he was out of action for several months one can only speculate as to the severity of his injuries.

Norman’s military records have been impossible to trace so it is assumed that they were lost amongst the “Burned Records” following German bombing in London during WW2. His WW1 index medal Roll shows him as Brodie, Norman W. , A.S.C., Pte., No. m2/148083. He was awarded the British War Medal and Victory Medal. The British War Medal was issued to personnel for leaving his native shore for service overseas while the Victory medal was issued to those who entered a theatre of war. 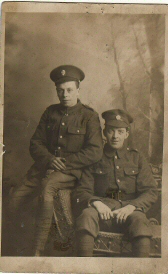 Norman with his cousin Angus

Norman’s cousin, Angus Leybourne Brodie, photographed with him,  was tragically killed on 17th June, 1915 just before the second battle of Ypres he is commemorated on the Menin Gate.

Norman Walter Brodie was a Freemason and member of Lodge Temperance 2557 which at the time of the Great War was meeting at the Royal Assembly Rooms, Westgate Road, Newcastle Upon Tyne. The hand written entry in the Roll of Honor at the end of the Lodge Temperance 2557 Minute Book reads “Pte. N. W. Brodie, Army Service Corps (Mechanical  Transports)”.

At the Lodge Temperance 2557 meeting held at the Assembly Rooms on the 21st December 1914 Norman was proposed by Bro. J. Cuthbert and seconded by Bro. Roderick Urquhart as a fit and proper person to be made a Freemason. He was a 22 year old coachbuilder living at Bayfield Gardens, Gateshead. At the meeting of the 18th January 1915 a successful ballot was held and he was initiated into the Mysteries and Privileges of Ancient Freemasonry. He was passed to the second or Fellowcraft degree on the 15th February and was raised to the Sublime degree of a Master Mason on the 15th March 1915. There is no record that he signed his Grand Lodge Certificate in open lodge in the minutes, perhaps because of his war service and injuries.

During his working life Norman ran his own bus company in Northern Ireland. When he returned to North East England he was involved with what must have been one of the first “package” holidays in that he took tourists as passengers on his buses to destinations in Europe.

He was a tremendous wood turner and interested in anything mechanical, having done an apprenticeship as a wheelwright he eventually became involved with motor mechanics. The family still have a marvellous scale model of a fully working cart that he made. He was an amazing gardener having the proverbial green fingers; one of his closest friends had been the head gardener at Capheaton Hall and to this day the family still have the Lilies that were given to him by his friend when he was a young man, they flower every year !

Family history and photos are by the kind permission of Norman’s granddaughter Carol Brodie.